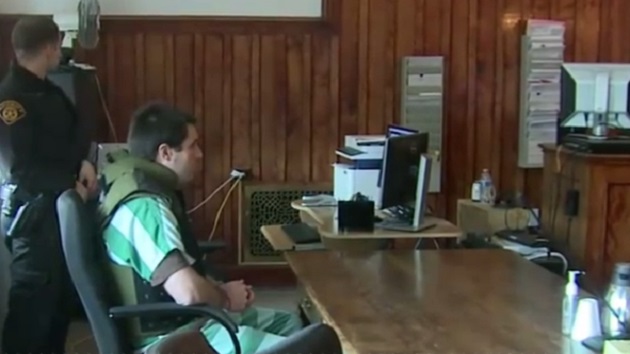 (DENVER, Colorado) — A Colorado man has been convicted of killing 29-year-old Kelsey Berreth, who was his fiancee and the mother of his young daughter, following a dramatic trial that brought bombshell testimony from witnesses, including a fellow inmate and his former girlfriend.As the trial of Frazee came to a close, prosecutors Monday described the case as a “deliberate, premeditated, cold and cruel murder.”A verdict was delivered just hours after closing arguments.Frazee was found guilty on all counts, including first-degree felony murder and three counts of solicitation to commit murder. He was sentenced an hour later to life without parole plus 156 years — the maximum possible sentence.”Your actions were vicious, senseless, without reason nor explanation. … Kelsey spent her last night caring for you — you repaid that kindness by viciously beating her to death,” Judge Scott Sells said. “After you beat her, you burned her body like a piece of trash. Your crimes deserve the absolute punishment available.”

Frazee was accused of attacking Berreth with a baseball bat at her Woodland Park, Colorado, home on Nov. 22, 2018 — which was Thanksgiving — while the couple’s 1-year-old daughter, Kaylee, sat in a playpen in a back room.

Prosecutors allege Frazee then put Berreth’s body in a black plastic tote and burned it on his property.

His defense attorneys, who did not call any witnesses, stress that a body and a murder weapon have never been recovered.’Only one person knows why’In closing arguments on Monday, prosecutors said Frazee knew Berreth, 29, was dead because he never attempted to contact her after Nov. 25, 2018.Prosecutor Beth Reid also reminded the jury that Frazee was captured on a neighbor’s surveillance camera outside Berreth’s condo at the same time he claimed he was 40 miles away tending to his cattle.Reid showed the jury security camera photos that captured Frazee’s red pickup truck driving in Woodland Park on Thanksgiving with a large black tote box in the back.”Her beaten and battered body is in that box, which he keeps on the back of the truck while he eats Thanksgiving dinner,” said Reid.Reid told jurors that they did not need to agree on Frazee’s alleged motive in order to convict him of murder.”The reality is,” Reid told the jurors, “only one person knows why.”Ex-girlfriend takes the standFrazee’s ex-girlfriend Krystal Lee was a star witness for the prosecution, and testified that Frazee called her to come to Berreth’s house to clean up the bloody aftermath.Lee told jurors that Frazee admitted to tying a blindfold around Berreth’s head and asked her to guess the scent of candles before beating her to death with a baseball bat.”I saw blood all over the floor and blood all over the wall,” she testified. “There was blood on the front of the stove and the dishwasher, and on the floor there were bloody footprints.”Lee, who has admitted to disposing of Berreth’s phone, has pleaded guilty to tampering with physical evidence. Records showed Berreth’s phone traveled with Lee’s phone to Idaho where Lee says she destroyed it. She is awaiting sentencing once Frazee’s case concludes.Notes to an inmateLast Friday, an inmate testified that Frazee recently asked him to use his connections to a prison gang to kill several witnesses in the case, including Lee.The inmate says he and Frazee were in jail together from Sept. 26 to Oct. 12, 2019.”He would pass me notes if his information was too sensitive,” the inmate said, claiming Frazee told him he’d take care of him financially when he got out.In court, a state investigator read from a number of those notes, which were written on paper towels and napkins. The notes, the investigator testified, contained hit lists, along with detailed instructions on where to find the witnesses. The list included Lee, her parents and her ex-husband.”They all need to disappear, unseen until 11/22 after the trial,” said a note, which the investigator testified appeared to be in Frazee’s handwriting. “I’d really like to see Krystal with a bullet in her head.”‘Patrick Frazee is not guilty’Defense attorney Adam Steigerwald questioned the credibility of Lee and the evidence, saying in his closing argument Monday, “This case has been built on a foundation it cannot support. Patrick Frazee is not guilty.”Steigerwald argued that the case against Frazee is circumstantial and based on a story “made up” by Lee, adding she didn’t cooperate with investigators until the district attorney agreed to a deal to not prosecute her for more serious crimes.”There is not one word from Krystal Lee until she has a signature on the dotted line,” Steigerwald said. “There is nothing she talked about that is believable.”Steigerwald also pointed out that neither Frazee nor Lee’s DNA were detected anywhere in Berreth’s condo, despite the prosecution theory that her condo was where Frazee killed Berreth and where Lee cleaned up the aftermath.Steigerwald also attacked evidence provided by a neighbor’s security camera, saying it did not show Frazee going onto Berreth’s home — or coming out — carrying a baseball bat or a tote. In addition, Steigerwald said none of Berreth’s neighbors heard or saw anything suspicious on Thanksgiving, which Steigerwald called an unlikely day to plan a murder.”Is there a day of the year when people are less likely to be alone? To be missed? To speak to your family than Thanksgiving Day?” Steigerwald asked the jury.Frazee was arrested in December 2018 on charges including first-degree murder. Judge Scott Sells told the jury they can also consider finding Frazee guilty of second-degree murder or manslaughter.