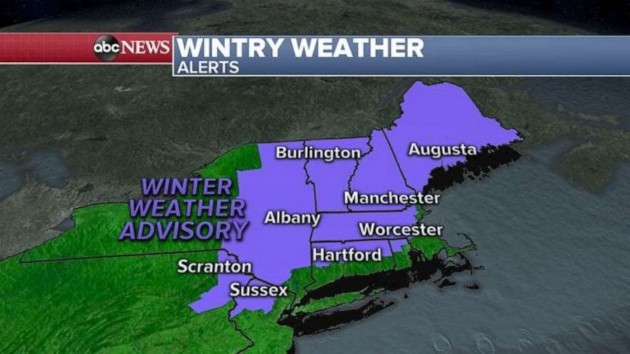 (NEW YORK) — A coastal storm is moving north Monday morning after pounding the outer banks of North Carolina over the weekend with huge waves, coastal flooding and gusty winds. On Monday morning, numerous states from Virginia to Maine are under a Winter Weather Advisory for snow and freezing rain and also Coastal Flood Alerts for coastal beach flooding from ocean waves and high tide.By Monday evening, the storm system will be off the Cape Cod coast continuing to bring an icy mix from New York to Maine and rain to lower elevations. Gusty winds are also expected in eastern New England and some could gust over 50 mph.On Tuesday morning, the storm system finally moves out to Canada but snow and icy conditions will continue from inland New York to inland Maine. Accumulations will not be high for snow, with most areas getting 1 to 2 inches, but the icy glaze on roads and bridges is what we are worried about over the next 24 to 36 hours.Two storm systems will combine in the West over the next few days to produce a threat for flooding in the Southwest and the first winter storm from California’s Sierra Nevada into the northern Plains. Elsewhere, a Winter Storm Watch has been posted from California to Montana. On Tuesday, two storms will enter the West Coast, one from the north and the other one from the South. By Wednesday morning, the storm systems will combine in the Rockies with heavy rain for Arizona and New Mexico and snow from Lake Tahoe to the Rockies. This storm system will move into the Midwest later in the week with snow and rain.Copyright © 2019, ABC Audio. All rights reserved.

‘Saved by the Bell’ reboot coming to Peacock on November 25
Presidential debate live updates: Trump vs. Biden and what you need to know ahead of first matchup
AG never asked grand jury to consider homicide charges in Breonna Taylor’s killing
Windy, dry, hot weather to continue in parts of California
Naya Rivera’s sister, Nickayla, responds to reports she moved in with sister’s ex, Ryan Dorsey
FAA administrator set to pilot 737 Max on Wednesday