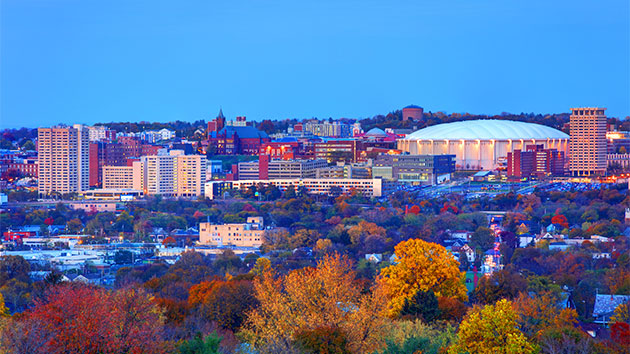 (SYRACUSE, N.Y.) —  A fraternity’s social activities at Syracuse University have been suspended for the rest of the semester after alleged racist incidents.In one incident, an African American female student was allegedly subjected to a verbal, racial epithet from a group of students and visitors to the campus, according to a public safety information notice posted on the school’s website.The female student “reported being verbally harassed by a large group of individuals who reportedly were yelling the ‘N-word’ as she walked by. There was no physical altercation,” the notice states.School officials say this is the “latest incident of several against Jews, Asians and African Americans.”Some individuals involved in these incidents are members and guests of a fraternity at the school, the university said. As a result, that fraternity has been suspended pending the outcome of the investigation.In another on-campus incident, a swastika was found drawn into the snow, Syracuse Police public information officer Matt Malinowski told ABC News. He said there were no suspects at this time, but that the police department was working with the university in the investigation.There are currently no suspects in that incident, Malinowski said.On Sunday evening, Syracuse Department of Public Safety Chief Bobby Maldonado said a $50,000 reward was being offered “for information leading to an arrest or actionable referral to the Office of Student Rights and Responsibilities.”Syverud issued a statement Friday on the incident, and a new, lengthier one on Sunday evening.”Tonight I have deep appreciation of the pain, anger and anxiety recent events have caused on our campus,” he said, in part. “When I spoke to you on Friday, I made a commitment to keeping you informed, and more importantly, to taking swift action. That is what our university has been doing.”Maldonado and his team “have assembled substantial evidence, including security camera video, eyewitness accounts and interviews,” according to a statement on the school’s website.”A generous University donor has offered a reward for evidence that leads to the apprehension of the individual or individuals responsible for these heinous acts,” Syverud said.