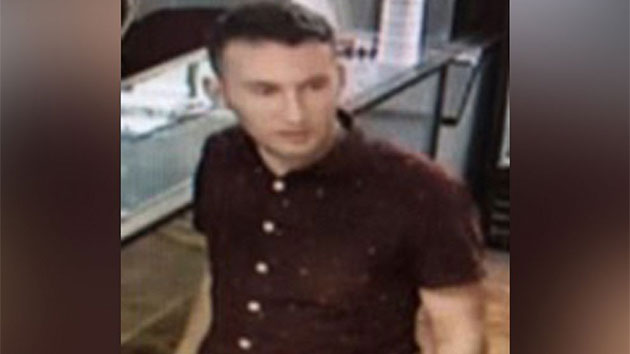 (NEW YORK) —  A Virginia family made a heartfelt plea for their son to turn himself in for murder after he allegedly deserted his Marine post in North Carolina and killed his mother’s live-in boyfriend.Authorities have been searching for Michael Brown, a 22-year-old Marine combat engineer, since last weekend when he was named as a suspect in the fatal shooting of 54-year-old Rodney Brown, who was found dead in his Hardy, Virginia, home on Nov. 9.Brown’s mother, Vanessa Hanson, begged for him to surrender in a tearful interview on Friday, saying she was afraid of losing him.”Michael, if you see this, please turn yourself in. I’m scared for you. I love you, baby,” she told Fox affiliate WFXR. “We will get you a lawyer. We will help you. I won’t leave you. Just please turn yourself in. I can’t lose another person.”The manhunt for Brown forced authorities in Roanoke to close schools last week when police learned that he may have been spotted nearby. Officials with Roanoke Public Schools canceled classes on Thursday and residents were told to shelter in place after police found Brown’s abandoned RV.Emergency dispatchers in Roanoke received a 911 call early Thursday morning detailing a suspicious man dressed in a black lace-linked coat near Patrick Henry High School in the city’s Grandin Court neighborhood, Roanoke Police Department Chief Tim Jones told reporters last week. There were also reports that Brown was seen knocking repeatedly on his grandmother’s window in Roanoke early Thursday morning, according to the department.Jones said Brown was likely traveling on foot and is believed to be armed with a high-capacity rifle. He may be looking for a vehicle to steal, Jones added, urging residents to stay vigilant and lock the doors to their homes and vehicles.”We have reason to believe he may be armed and dangerous, and if he is confronted or pushed into a position where he feels like he has no other alternative then he may use force,” Jones said. “He may be seeking opportunities to find other modes of transportation out of the area, so folks need to understand this is not the day to leave your vehicle running on a convenience store lot or to be offering strangers rides if you don’t know them.””I would caution people that if they receive knocks on the door and they do not know the individual on the other side, take the appropriate action and make sure that you know who those people are who are coming to your homes,” he added.Brown’s family refused to speak about the charges against him in their interview on Friday, but they confirmed that they’d been cooperating with police in an effort to bring him in safely.”We still care about you. Nobody wants you hurt,” his grandmother, Diane Hanson, said. “We’ve been speaking with the authorities for a week and they’re willing to do anything to get you in safe. And they’re working with us and we trust them on this. Please, turn yourself in. Nobody wants to see you die, also.””We have no idea what the motive of the shooting is at this time. I think it would be not appropriate to even speculate on that for investigative purposes, but let me say that this has been a very dynamic response by even more agencies than you see represented here behind me,” said Jones.The FBI, U.S. Marshalls and NCIS have all joined in on the search for Brown and authorities are offering up to $10,000 for information leading to his arrest.Authorities in Franklin County, Virginia, have issued an arrest warrant for second-degree murder and the use of a firearm in the commission of a felony for him.Attorney Deborah Caldwell-Bono, who has been retained by the family to represent Brown, said the lack of violence during the manhunt speaks volumes about his character.”It will help for him to know he has this support base. This is totally out of character for him [there isn’t] a violent bone in his body,” she said. Copyright © 2019, ABC Audio. All rights reserved.