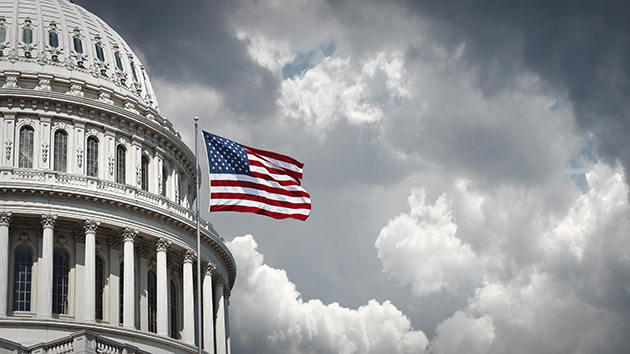 (WASHINGTON) — A State Department official, who was subpoenaed to testify amid the House impeachment probe, told lawmakers that President Donald Trump asked EU Ambassador Gordon Sondland in a phone call about the status of an investigation he requested from the Ukrainian president.David Holmes, the U.S. diplomat in Kiev, Ukraine, appeared for a closed-door deposition with House impeachment investigators on Friday. The hearing took place immediately following the House Intelligence Committee’s questioning of former Ukraine Amb. Marie Yovanovitch in the second public hearing amid the impeachment probe.Holmes, fielding questions from investigators behind closed doors for six hours, described the conversation between Sondland and Trump that he said he overheard from the ambassador’s cell phone at a restaurant in Kiev on July 26, just one day after the president’s second call with Ukrainian President Volodymyr Zelenskiy — when Trump appeared to encourage Zelenskiy to work with his personal lawyer, Rudy Giuliani and Attorney General William Barr on investigations into the 2016 election and former Vice President Joe Biden’s family.”I then heard President Trump ask, ‘So he’s gonna do the investigation?’ Ambassador Sondland replied that ‘he’s gonna do it,"” adding that Zelenskiy “will do ‘anything you ask him to,"” according to a copy of his opening statement obtained by ABC News. CNN first reported the details of Holmes’ remarks.Holmes added that Sondland told Trump: the Ukrainian president “loves your ass.””The President’s voice was very loud and recognizable, and Ambassador Sondland held the phone away from his ear for a period of time, presumably because of the loud volume,” he said, according to the copy of his opening statement.The new testimony raises additional questions for the White House about Trump’s knowledge of and involvement in efforts to pressure Ukraine to launch alleged investigations.While Trump and his Republican allies have argued that he was working to combat corruption in Ukraine, the new account from Holmes suggested the president was more focused on an investigation into Biden’s son Hunter and his relationship with the Ukrainian energy company Burisma.Holmes said he asked Sondland if it was true that Trump didn’t care about Ukraine — and claims that the ambassador agreed, adding that “Trump only cares about big stuff.””I noted there was ‘big stuff’ going on in Ukraine, like a war,” Holmes said in his statement. “And Ambassador Sondland replied that he meant ‘big stuff’ that benefits the President, like the ‘Biden investigation’ that Mr. Giuliani was pushing.”Both Republicans and Democrats suggested that Holmes could appear publicly in the coming weeks to share his account of the Trump-Sondland phone call, as well as his other observations from his post at the U.S. embassy in Kiev.”In that statement that was released there is a lot to be concerned about,” California Rep. Eric Swalwell told reporters Saturday. “Particularly that more witnesses described the president’s obsession with investigating his political opponents.”North Carolina Rep. Mark Meadows, said the testimony from Holmes corroborated what Amb. William Taylor said in his sworn public testimony on Wednesday about the call, and brought up more questions for Sondland.Other Republicans downplayed the new account.”You got some guy who overheard a phone call,” Ohio Rep. Jim Jordan told reporters. “I’m sure the Democrats are going to bring him, well I’m betting they’re going to bring him for a hearing and we’ll get a chance to question him in the open.”After a week of public impeachment hearings, Jordan said he believed “things are going well” for Trump amid the impeachment proceedings.”You know they’ve had three hearings, three witnesses with no firsthand knowledge the facts. I say this all the time but, the thing about facts, they don’t change,” he said. “We have the call transcript, we have two individuals on the call, [President] Trump, [President] Zelenskiy that say there was no linkage, no pressure, no pushing whatsoever.”Sondland is scheduled to testify publicly next week in an open hearing, the first featuring a key player in the impeachment inquiry who frequently interacted with the president.Democrats have left open the possibility of hearing from more witnesses as the investigation continues. Holmes, in his opening statement, said he decided to come forward after reading reports “noting the lack of first-hand evidence in the investigation.””I came to realize that I had first-hand knowledge regarding certain events on July 26 that had not otherwise been reported, and that those events potentially bore on the question of whether the President did, in fact, have knowledge that those officials were using the levers of our diplomatic power to induce the new Ukrainian President to announce the opening of a particular criminal investigation,” he said in his statement.The House Intelligence Committee has five public hearings with eight witnesses scheduled for next week.Impeachment investigators also gathered Saturday to depose Mark Sandy, a career Office of Management and Budget official, who became the first staffer from the budget office to cooperate with their investigation.Copyright © 2019, ABC Audio. All rights reserved.