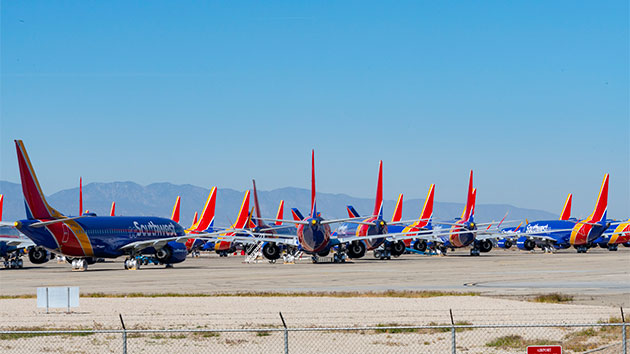 (NEW YORK) — United is joining American and Southwest Airlines in extending cancellations tied to the Boeing 737 Max into March.The Federal Aviation Administration grounded the aircraft after it was involved in two crashes in Indonesia and in Ethiopia that killed a total of 346 people. Although the timing ultimately will be up to regulators, including the FAA in the U.S., should the airlines stick to these plans, the Boeing 737 Max could resume commercial service just a few days shy of the one-year anniversary of the Ethiopian Airlines crash on March 10, 2019. The FAA grounded the jets March 13.United announced its decision Friday to pull the Max out of its schedule until March 4. United previously extended cancellations related to its fleet of 14 737 Max jets planes through Jan. 5. United said it expects to cancel 5,600 flights from December through February, and 168 flights in early March.”We won’t put our customers and employees on that plane until regulators make their own independent assessment that it is safe to do so,” United said in a statement Friday.Southwest, which owns the most 737 Max planes, last week became the first U.S. carrier to remove the jet from its schedule into March. American Airlines’ decision followed Southwest’s by just a few hours, with American saying it intended to add it back into service on March 5.In both crashes, it appears the angle-of-attack sensor was sending incorrect data, misfiring the Maneuvering Characteristics Augmentation System, or MCAS, which pushed the plane’s nose down repeatedly even as pilots fought to gain altitude. One of the software fixes Boeing said has been completed is a change to rely on two sensors, not just one, to activate the MCAS. A second software fix is related to the overall flight-control software system.Boeing on Monday reaffirmed its belief that the jet will be re-certified before the end of the year. The company said it may be possible to deliver new Max aircraft in December, but acknowledged that four key milestones remain before FAA certification, including a certification flight and reaching a consensus on pilot training.”With the rigorous scrutiny being applied, we are confident the Max will be one of the safest airplanes ever to fly,” Boeing said, echoing earlier comments.FAA Administrator Steve Dickson said on Tuesday the agency’s “return-to-service decision for the Max will be based solely on [its] assessment of the sufficiency of Boeing’s proposed software updates and pilot training that addresses the known issues for grounding the aircraft.”A former commercial pilot himself, Dickson added, “I am not going to sign off on this aircraft until I fly it myself and am satisfied that I would put my own family on it without a second thought.” Copyright © 2019, ABC Audio. All rights reserved.