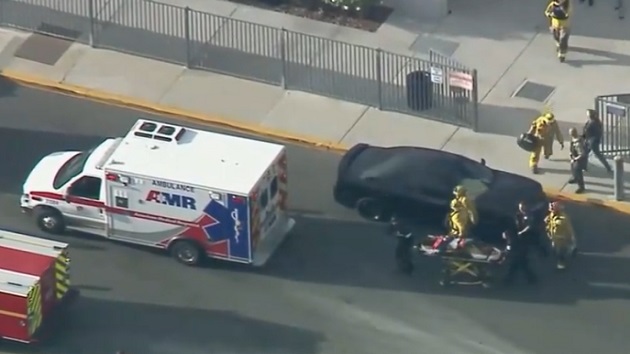 (SANTA CLARITA, Calif.) — Megan Puettmann was in class Thursday morning when she heard the faint sound of gunshots.Students and teachers alike were confused as the seconds passed without any announcements over the loudspeaker at Saugus High School in Santa Clarita, California.Then they heard more gunshots and even screams, she said. Panic and fear began to set in.”We could hear kids crying,” Puettmann, 17, who is the editor-in-chief of the school yearbook, told ABC News in a telephone interview Thursday.The school was placed on lockdown and the students in Puettmann’s classroom began barricading the door with desks and chairs. Then they waited silently in the dark classroom for what felt like forever, she said, until police arrived and evacuations began.”It’s just scary because I didn’t know if my friends were OK,” Puettmann told ABC News. “We weren’t getting updates … We didn’t know anything for an hour and a half.”A 16-year-old student had taken a gun from his backpack and opened fire in the quad of Saugus High School. He shot five of his classmates, killing at least two, before taking the gun to his head and pulling the trigger, according to the Los Angeles County Sheriff’s Department.The whole shooting lasted about 16 seconds, authorities said.The alleged gunman was taken into custody and was last reported to be at a local hospital in critical condition from a self-inflicted gunshot wound to the head, authorities said.A 14-year-old boy and a 16-year-old girl died from their gunshot wounds after arriving at the hospital. A 14-year-old girl, a 15-year-old girl and a 14-year-old boy were also shot but survived, authorities said. The names of the victims have not been released.Puettmann said she wants pages of the upcoming school yearbook to be in memory of their slain classmates. The editor-in-chief said she was already planning to dedicate a section of the yearbook to the nationwide issue of gun violence in schools, but now wants to do something more in-depth that “spreads awareness and helps students somehow.”There have been nearly 70 shooting incidents at schools across the country this year alone, and more than 400 in the last decade, according to data collected by the Center for Homeland Defense and Security at the Naval Postgraduate School in Monterey, California.“Our entire community is changed forever,” Puettmann told ABC News. “It’s not going to be OK.”