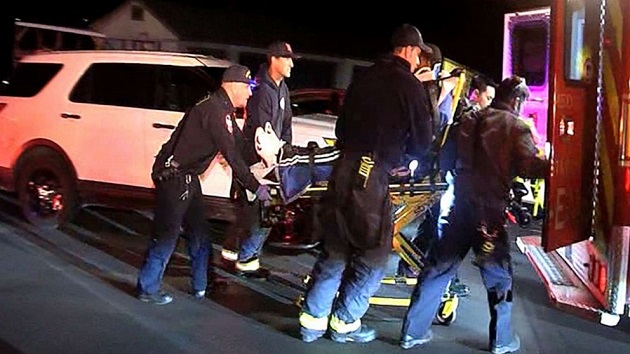 (SAN FRANCISCO) — Police have arrested five suspects in the Halloween shooting at a California Airbnb that left five partygoers dead.The arrests came during a coordinated police operation in four Northern California cities, reported San Francisco ABC station KGO-TV.Five partygoers were killed on Halloween night at a house in the affluent town of Orinda, just east of Berkeley, that had been rented through Airbnb. The owner of the home told the San Francisco Chronicle that he had rented out the house to a woman who told him she was planning to have a family reunion for about a dozen people.Instead, authorities said that upwards of 100 partygoers fled the house in panic after shots rang out. One witness told the Chronicle that most of the party’s attendees were college students.The Contra Costa Sheriffs Office confirmed to KGO the arrest of five men between 20 and 20 years old in connection with the shootings. Four of the men were being held without bail on murder and conspiracy charges, while one was being held as an accessory.Contra Costa County sheriff David Livingston said Thursday that two of the victims at the party were themselves armed, which he said may have “played a role in the tragedy,” according to KGO.Orinda Mayor Inga Miller told KGO she was relieved that police were making progress in the case.”I think in this time of uncertainty, people feel fear, they feel many emotions,” Miller said. “They feel sadness for the victims in this case, and fear for a shooting anywhere.”Following the shooting, Airbnb CEO Brian Chesky said that the company would increase efforts to “combat unauthorized parties and get rid of abusive host and guest conduct.” Copyright © 2019, ABC Audio. All rights reserved.