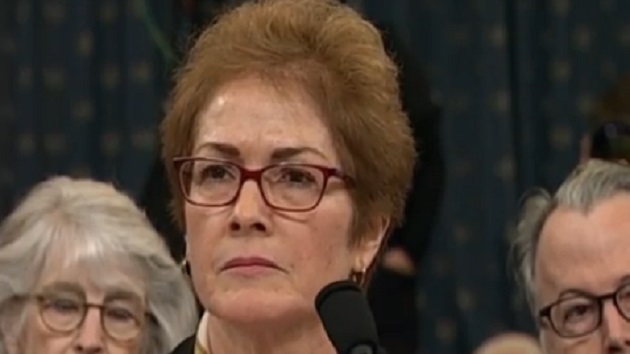 (WASHINGTON) — House Democrats accused President Donald Trump of intimidating a witness testifying as part of an impeachment inquiry into his behavior after the president trashed his former ambassador to Ukraine on Twitter Friday.  “Everywhere Marie Yovanovitch went turned bad,” Trump tweeted about the ambassador, as she testified before the House Intelligence Committee.A career foreign service officer, Yovanovitch was removed from her post in Ukraine earlier this year. She previously served as ambassador to Armenia and Kyrgyzstan, and she has worked in U.S. diplomatic missions across the world, including Mogadishu, Somalia.”She started off in Somalia, how did that go?” Trump said. “Then fast forward to Ukraine, where the new Ukrainian President spoke unfavorably about her in my second phone call with him.”The president tweeted as the ambassador testified before the House Intelligence Committee, and soon after, the committee’s chair, Rep. Adam Schiff, D-Calif., read the tweets aloud.A visibly shaken Yovanovitch said Trump’s tweets were “very intimidating.”Speaking to reporters during a break in the hearing, Schiff said Trump is “once again going after this dedicated and respected career public servant in an effort to not only chill her but to show others who may come forward.”

“We take this kind of witness intimidation and obstruction inquiry very serious,” Schiff added.The White House denied Trump was engaging in witness intimidation.”The tweet was not witness intimidation, it was simply the president’s opinion, which he is entitled to,” White House Press Secretary Stephanie Grisham said in a statement. “This is not a trial, it is a partisan political process — or to put it more accurately, a totally illegitimate, charade stacked against the President. There is less due process in this hearing than any such event in the history of our country. It’s a true disgrace.”

Speaker of the House Nancy Pelosi said witness intimidation is undoubtedly a crime but said she couldn’t comment on Trump’s tweet because she hadn’t seen it.

“I haven’t seen the tweet; I’m not going to comment on it, I am just commenting on what witness intimidation is,” Pelosi told reporters on Friday.

Rep. Alexandria Ocasio-Cortez, D-N.Y., said Trump was “clearly not satisfied with only one article of impeachment.”His choice to publicly broadcast his own, personally authored witness intimidation means he’s wants to sign up for another article on obstruction of justice, too,” she tweeted.In the president’s tweets this morning, he also defended Yovanovitch’s dismissal by noting he had the “absolute right to appoint ambassadors.””They call it ‘serving at the pleasure of the President,’” he wrote.Earlier, the White House said Trump would watch the opening statement by the top Republican on the committee, Devin Nunes, R-Calif., but suggested he would tune out during the rest of the hearing, which would have included Yovanovitch’s actual testimony.”The President will be watching Congressman Nunes’ opening statement, but the rest of the day he will be working hard for the American people,” White House Press Secretary Stephanie Grisham said Friday morning.