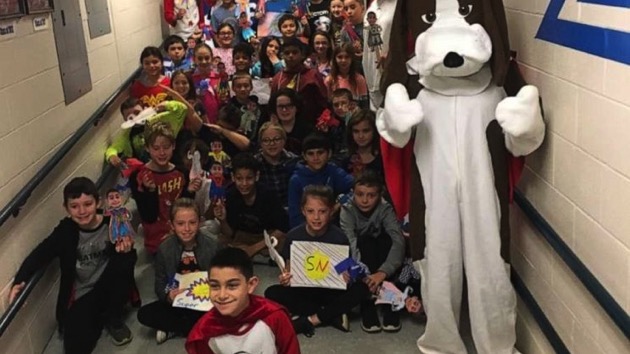 Nicholas Corapi and his supporters at Hopedale Memorial. (Joe Corapi)
Posted on November 14, 2019 by ABC News

(UXBRIDGE, Mass.) — Nicholas Corapi needs a new kidney, and his school is rallying around him while he waits for the perfect match.The 10-year-old’s mom, Kim Corapi, told Good Morning America that when he was born he was in kidney failure, something his parents found out while Nicholas was in still in utero. One of his kidneys was removed, but the other, which was operating at about 20 percent, his mom said, served him well enough — until recently.He’s been monitored closely throughout the years, getting his blood checked regularly, but in July, his mom said, he just didn’t seem himself.”He was very tired and sleeping all the time,” the Uxbridge, Mass., mom said. It turned out his kidney had totally shut down.Now Nicholas is on dialysis three days each week while waiting for a match. He wakes up at 4:30 a.m. on dialysis days to drive to Boston for his appointments.One of the things that makes Nicholas’ case unique, his mom said, is that he must have an O-type donor, significantly shrinking the pool of possible donors.His parents have both a Facebook page and a website where people interested in becoming a possible donor can get started. Corapi said any medical procedures for the donor are covered by the family’s insurance.Nicholas, a third grader at Hopedale Memorial, loves school but has to miss it twice a week.”His teachers even called me over the summer to see how he was doing,” his mom said. “It’s such a close-knit community, and they treat everyone like family.”So much so that the school came up with a plan to keep Nicolas’ spirits up.”The principal and one of his teachers just wanted to do something to raise awareness [about his need for a kidney],” Corapi said. So they held a kind of pep rally for their “Superhero Nicholas,” a moniker born from the boy’s love of superheros. The school made T-shirts for his parents from a drawing he’d made.The kids lined the hallway and made signs and cheered him on, his mom said.When it came time to walk the hallway, “He didn’t even wait for us,” Corapi told GMA. “He just flew down the hall.”