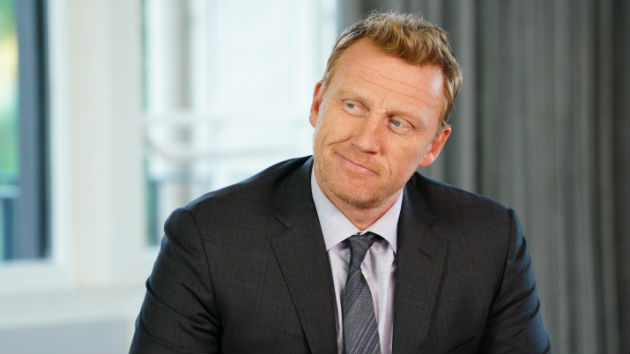 In tonight’s installment, Ellen Pompeo’s Dr. Meredith Grey has to face off against the medical board, with the future of her long career hanging in the balance. And, while her future is uncertain, her past comes into play as well, ABC teases.

Actor Kevin McKidd appeared on Live with Kelly and Ryan Thursday, to preview the “intense” episode, and to marvel at Grey’s longevity.

“It’s such a blessing,” McKidd, who plays Dr. Owen Hunt, joked.  “I started just as we’d done a hundred episodes and back then, people were like, ‘We’ve maybe got two more seasons."”

Grey’s Anatomy, from creator Shonda Rhimes, debuted on March 27, 2005, and over the year’s it’s earned 39 Emmy nominations and five wins, including an Outstanding Supporting Actress trophy for Kathrine Heigl. But Heigel famously flamed out on the show — and eventually Hollywood’s A-List — when she took her name out of contention in the 2008 Emmy race, saying she didn’t think the material Rhimes gave her was good enough “to warrant an Emmy nomination.”

Meanwhile, Pompeo, 49, has become the highest-paid actress on television, with a salary of $20 million a year, plus other lucrative perks. She told The Hollywood Reporter last year, “I’ve finally gotten to the place where I’m OK asking for what I deserve, which is something that comes only with age…Because I’m not the most ‘relevant’ actress out there.”

“I know that’s the industry perception because I’ve been this character for 14 years,” she added. “But the truth is, anybody can be good on a show season one and two. Can you be good 14 years later? Now, that’s a f***n’ skill.”