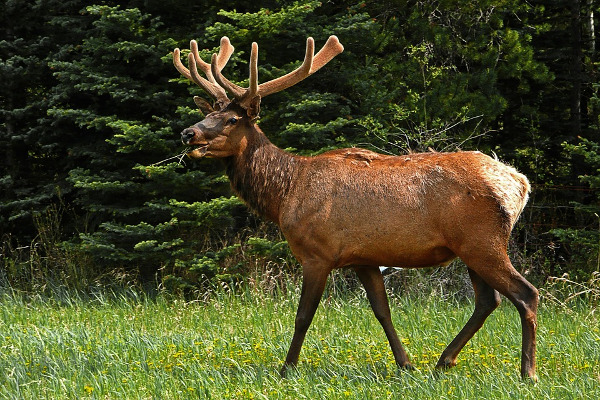 Eighty-nine elk were taken by hunters during the season. And for those licensed to hunt antlered elk, also known as bulls, the success rate was 100 percent, with 27 of 27 tags filled.

The 2019 harvest included some large elk. Fourteen bulls were estimated to weigh 700 pounds or more. The heaviest bull, tipping the scales at 800 pounds, had a 10-by-9 rack and was taken in Gibson Township, Cameron County by Caleb Hostetter, of Boiling Springs, Pa.

The second-largest bull in the harvest was a 788-pounder with an 8-by-7 rack taken in Covington Township, Clearfield County by Willis Humes, of Cheswick, Pa.

Official measurements of bull racks taken in the hunt cannot be recorded until the antlers have air dried for at least 60 days after the animal was harvested.
There also were some hefty antlerless elk taken in the harvest. Ten of the 62 cows taken by hunters during the one-week season weighed over 500 pounds.

“Although we’re satisfied with the overall general season elk harvest – it’s tough to top a bull harvest that goes 27 for 27, for the second consecutive year there was a slightly lower success rate for antlerless elk hunters in a few hunt zones,” said Jeremy Banfield, Game Commission elk biologist. “But there are no guarantees hunting Pennsylvania elk.”

Elk were taken across 12 hunt zones in the general hunting season, which demonstrates just how substantial Pennsylvania’s elk range has become, Banfield noted.

“It’s a tribute to the herd’s resiliency, the work being accomplished by the Game Commission and Department of Conservation and Natural Resources and assistance from the Rocky Mountain Elk Foundation and Keystone Elk Country Alliance,” Banfield explained.

Successful hunters within 24 hours of harvest are required to bring their elk to a check station, where tissue samples are collected to test for chronic wasting disease, brucellosis, and tuberculosis. To date none of these diseases have been detected in Pennsylvania elk.

To participate in the elk hunt, hunters must submit an application, then must be selected through a random drawing and purchase a license. The drawing annually attracts more than 40,000 applicants.