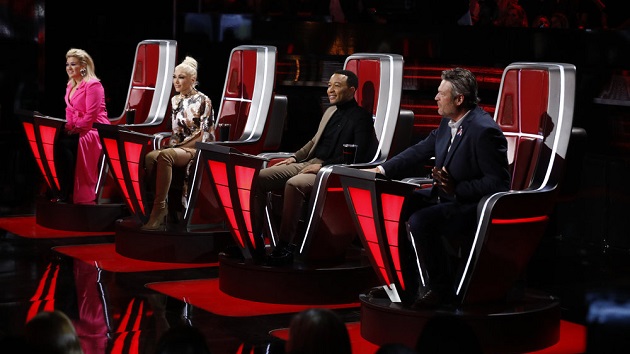 The live playoffs began on Monday night’s The Voice, with the five artists each from Blake Shelton, Kelly Clarkson, John Legend and Gwen Stefani’s teams performing for a spot in the top 12.

America had the chance to vote for their favorite artist from each team, with the four with the most votes advancing to the top 12.  For the first time, the 13th spot will be determined by a wild “Instant Save.”  Host Carson Daly instructed viewers to cast their votes using The Voice official app or at NBC.com.

Country singer Gracee Shriver, 16, experienced some off-camera technical problems with her guitar, forcing her to change her whole performance on the fly.  The coaches applauded the teen for handling it like a pro.

Also performing for Team Blake: Cali Wilson with a jazzy spin on Britney Spears’ “Toxic”; and Kat Hammock and Ricky Braddy, tackling The Beach Boys’ “God Only Knows” and Steve Winwood’s “Roll with It,” respectively.

Powerhouse vocalist Rose Short covered Janet Jackson’s “What Have You Done for Me Lately.”  “You’re not even on my team and I can’t sit down,” Clarkson declared in response to the “sexy” performance.

Joana Martinez performed a cover of Bebe Rexha’s “You Can’t Stop the Girl” that prompted former coach Blake Shelton to say letting her go was the “stupidest thing” he’s ever done.

Maya and Chelsea — a.k.a. Hello Sunday — were next.  The duo, both 14 years old, showcased their beautiful harmonies on Adele’s “Hello.”  Clarkson, who recalled she was 19 when she competed on American Idol, said she would have “peed her pants” if she attempted that at their age.

Shane Q crooned “Can’t Take My Eyes Off You,” by Frankie Valli and the Four Seasons.  Blake thought the singer “knocked it out of the park” while Kelly declared Shane could sing anything, and sing it better than the original artist.

Max Boyle’s rendition of Glen Hansard and Markéta Irglová’s “Falling Slowly,” prompted Clarkson to declare, there was no way the “gifted” singer wasn’t going “all the way.”

Marybeth Byrd’s version of “Love Me Like You Do” by Ellie Goulding brought all four coaches to their feet, with Blake calling it his favorite performance of the night.  Legend agreed, saying it was “head and shoulders above” anything she’d done thus far in the competition.

Will Breman jazzed up Taylor Swift’s “Style,” leading a stunned Kelly to declare, “You just won The Voice…the rad human, like you won it all!”  Citing his “charisma” and “personality,” Legend called Breman “a true artist.”

Katy Kadan, known for her high-energy performances, showed off her softer side on Lady Gaga’s “Always Remember Us This Way.”  John called the performance “stunning,” adding she “oozed power and emotion.

Also performing for Team Legend: Khalea Lynee with Lauren Daigle’s “Love Like This”; and soulful pop artist Alex Guthrie tackling Alicia Keys’ “If I Ain’t Got You”

The Voice returns with a one-hour episode on Tuesday at 8 p.m. ET on NBC.