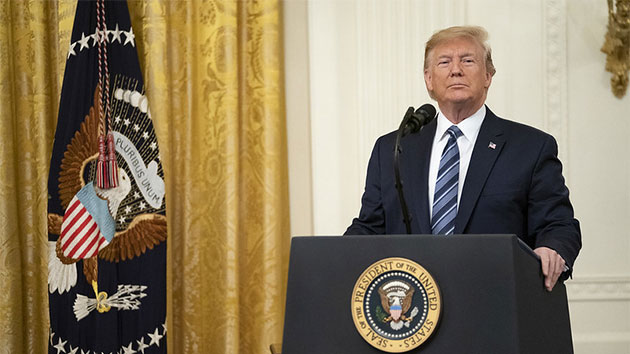 (WASHINGTON) — In his pursuit to broaden his base ahead of 2020, President Donald Trump on Friday launched a “Black Voices for Trump” coalition — an effort to coalesce what is usually a dedicated Democratic-leaning voting bloc around his re-election campaign. “With your help, we’re going to travel all across the country to every community, urban, rural, suburban, and we’re going to campaign for every last African-American vote in 2020,” Trump told the predominantly black audience.”We’ve done more for African Americans in three years than the broken Washington establishment has done in more than 30 years,” Trump continued. “We’ve created 6.7 million new jobs since the election…Last month, the African American unemployment rate reached the lowest level ever recorded in the history of our country.”The effort follows the launch of four other coalitions earlier this year: “Latinos for Trump,” “Women for Trump,” “Workers for Trump” and newly-created “Veterans for Trump.”Trump’s outreach to the African American community comes as Trump tries to make inroads with this key demographic by shifting the focus to what campaign officials say are the positive aspects of his record, such as the First Step Act, portrayed as a significant stride in criminal justice reform signed into law late last year, low unemployment rates, which have remained below 4% overall and below 6% for African Americans in recent months, according to an October survey by the Bureau of Labor Statistics, and investments in historically black colleges (Trump recently stopped at the HBCU Benedict College to deliver a speech for a criminal justice forum).Throughout his 2016 campaign, Trump sought to get the black vote behind his candidacy with the line: “What do you have to lose by trying something new?”Trump called the refrain his “best work” at the event Friday before calling himself the “greatest champion” for African Americans.”I do my best work off-script. My best work. I hate to say this, I also do my worst work off-script,” Trump said. “That was my best work…It was a very important statement to be made because honestly, the Democrats have let you down and then I made you a solemn pledge that whether you voted for me or not, I would be your greatest champion.”The Trump campaign argues that the president has “strong support” among black Americans. But politically, he has struggled to convert his commitments to African Americans into enthusiasm from the minority group.”Black Americans strong support for President Trump will ensure a second term for the President,” Trump campaign senior adviser Katrina Pierson said in a statement.But Trump’s pitch to the black community runs up against his record over the course of his presidency of racially divisive language — from his 2017 remarks on the violent confrontations during a massive white supremacist rally in Charlottesville, Virginia, when he said there are “fine” people “on both sides” to his disparaging comments about immigrants from Haiti, Africa and other “s—hole countries” in early 2018, to his repeated attacks against minority members of Congress including Rep. John Lewis, D-Ga., the late Rep. Elijah Cummings, D-Md., and members of the so-called “squad” including Reps. Alexandria Ocasio-Cortez, D-N.Y., Ayanna Pressley, D-Mass., Ilhan Omar, D-Minn., and Rashida Tlaib, D-Mich.Just days before his inauguration, then-President-elect Trump took aim at Lewis, whose district includes most of Atlanta, suggesting the city was “falling apart” and called it “crime infested” after the congressman announced a boycott of inauguration.Earlier this year, Cummings drew the president’s ire after he criticized Trump’s immigration agenda — and Trump responding with a slew of incendiary comments claiming Baltimore, part of which the congressman represented, as a “a disgusting, rat and rodent infested mess” in which “no human being would want to live.”One political expert signaled that Trump’s efforts to court the African American vote with a “transactional” pitch might fall short.”There are these things that have gone in African Americans’ favor but I think that what also has come along with is racial divisiveness, for which he has not apologized for, and sort of creating a climate that has engendered more racial tensions, as opposed to racial reconciliation and harmony,” said Andra Gillespie, a political science professor at Emory University. “That stuff is not offset by the fact that there are some policy initiatives that would work in African American favor he has a credibility problem.”African Americans see Trump’s string of onslaughts against minorities “as a lack of support,” Gillespie said.”The majority of African Americans vote Democratic in elections,” she noted. “There is the fact that the divisiveness started when he was a candidate, their seemed to be a lot of animus directed toward President Obama, who is beloved in the African American community.”Trump spent years casting doubt on the former president’s birthplace, and rose to political prominence in part by joining fringe theorists in making false allegations regarding Obama’s birth certificate as part of the “birther” conspiracy movement.Trump has a consistently dismal approval rating among blacks, with only 10 percent of blacks approving of the job he’s doing in a new ABC News/Washington Post poll. And Trump’s support among black voters continues to be thin, with about 9 in 10 picking the Democrats over the president, according to a recent ABC News/Washington Post poll.Trump is also raising $3.5 million in Atlanta for Georgia Trump Victory Friday, a joint fundraising committee benefiting the RNC, Trump campaign, and Georgia GOP Sen. David Perdue campaign, who is also up for re-election in 2020, according to an RNC official.Trump faces a steep uphill climb to win over African American voters, in the state of Georgia, 94 percent of black voters backed gubernatorial candidate Stacey Abrams, a rising star in the Democratic party, in the 2018 midterm elections.Gillespie said she sees Friday’s launch as “a signal that Georgia is becoming competitive and that Republicans are going to fight to keep their dominance in the state, and presidential elections and they see African Americans as a part of it.”