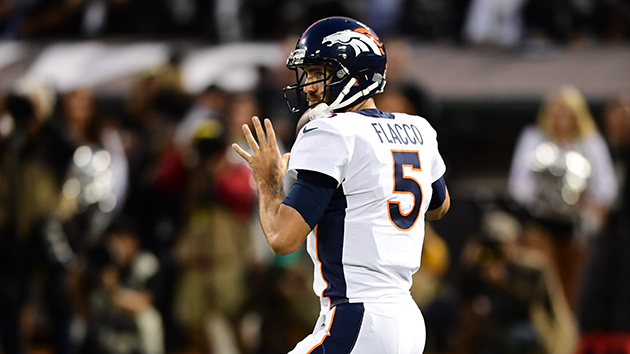 (DENVER) — Veteran quarterback Joe Flacco will miss at least four weeks with a neck injury, ESPN reports, and may be placed on season-ending injured reserve.The Denver Broncos still plan to have doctors review Flacco’s neck injury, but expect the 34-year-old to be out for four to six weeks. The injury is reported to be a bulging disc in Flacco’s neck, and is not expected to require surgery.In Flacco’s absence, the team will turn to Brandon Allen as their starting quarterback. The 27-year-old played college football at the University of Arkansas. Head coach Vic Fangio said this week the team would consider signing and elevating rookie Brett Rypien from the practice squad, or if fellow rookie Drew Lock is ready to be activated from injured reserve.Flacco has been sacked 26 times in eight starts this year, the third most in the NFL. Copyright © 2019, ABC Audio. All rights reserved.