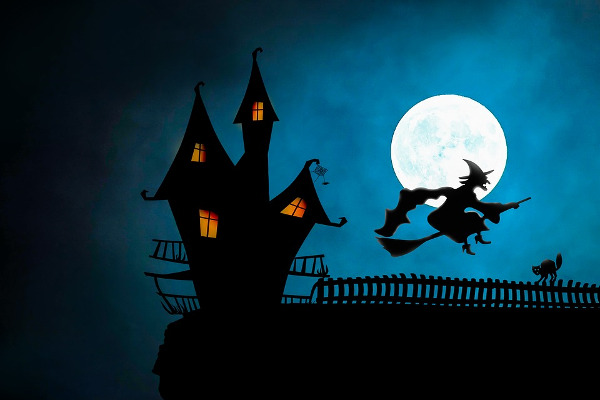 DuBois, PA – Local author Donna Flores has written a special Halloween poem! Donna often goes to hospitals to share her stories and poems with the kids there.

Written by Donna Flores in 1996, inspired by her daughter, Miranda

The moon was big and bright.

The children were watching the witch on her broom,

holding her big black cat all through the night.

The children had just carved an orange pumpkin that had a spooky face,

when all of a sudden, out flew a ghost who asked them if they wanted to race!

Well, the children answered with their hair now standing on end,

“Come on, we’ll race you all the way to the bend!”

To all of the their surprise, to a haunted house now in front of their eyes.

that encircled the house they had now just seen.

They went a little closer to get a better look,

when all of a sudden out popped a goblin

who dropped off a very old and very big book.

The children all looked at the front cover, which read,

“Be careful of the bat who had worn a black hat

for he would turn children into pumpkins!”

Well, the children all laughed to think of a bat

who would have a large enough head to wear such a hat!

Nevertheless, they would do their best

to avoid such a mean kind of bat.

The children ventured up the hill to the big haunted house,

now only hearing the sound of a mouse as it quickly scurried by.

As they entered inside, now swallowing their pride,

they followed a light into a room

where they could now see a witch and her broom!

They carefully walked in

only to be a Halloween friend,

but they were very scared when she turned and looked at them!

Her hair all straggly long and black,

her gown all tattered and torn,

with a wart on her nose,

and a black sack on her back!

But she smiled in time, thanking them for being ever so kind.

Then she reached into her bag and pulled out so very many things,

She then offered them to everyone

who had wished her a happy Halloween greeting

and said she thought they were very brave

for coming up and even having this meeting!

She apologized as she asked them to leave.

She wished them a happy Halloween too,

but there was so little time and so much to do!

She had to find the bat who wore the black hat

who was turning children into pumpkins

into the beautiful children their parents had known and loved so well!

As the witch rode off on her broom,

the children could hear it as it made a load VROOM!

She was able to yell though as she rode out of sight,

“Have a happy Halloween and a very good night!”