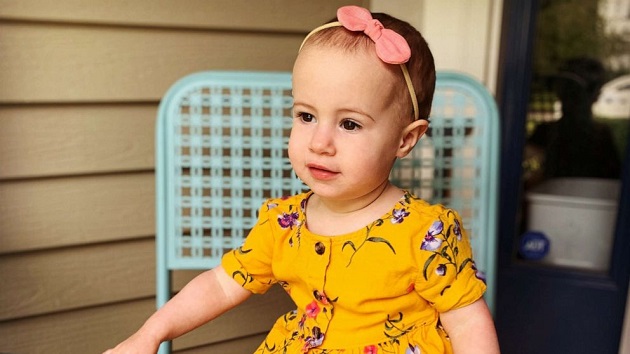 (SAN JUAN, Puerto Rico) — The grandfather who was with his 18-month-old granddaughter when she fatally fell from a Royal Caribbean cruise ship has been arrested and charged with negligent homicide, the Puerto Rico Department of Justice announced.An island judge imposed a bond of $80,000 Monday for 51-year-old Salvatore Anello. His preliminary hearing is set for Nov. 20. The PR Department of Justice confirmed to ABC News that the grandfather has been released on bond.Chloe Wiegand was traveling with her grandparents on the cruise ship on July 7, when Anello put her on a wood railing in front of a wall of glass windows. Chloe went to bang on one of the windows, according to family attorney Michael Winkleman, but it was open and she was quickly “gone.”Since the incident, the family has maintained that the cruise line is at fault. Winkleman told ABC News that they are still waiting to see closed-circuit TV footage of the incident.”These criminal charges are pouring salt on the open wounds of this grieving family. Clearly, this was a tragic accident and the family’s singular goal remains for something like this to never happen again. Had the cruise lines simply followed proper safety guidelines for windows, this accident likely would never have happened,” Winkleman said in an interview with ABC News. “Really for them, this is really about Chloe. It’s not about anything else other than Chloe – it’s all about raising awareness so that a tragedy like this doesn’t happen again.”Winkleman said this charge is an overreach and amounts to “ultimately,” a criminal misdemeanor.”Why are you going to charge him with a misdemeanor when you know he’s already been through such a terrible trauma? Everybody on earth agrees this was an accident, everybody knows there was no intent involved, and it sort of begs the question why – I don’t know what the answer is but I have some theories – unfortunately it’s really just pouring salt on the open wounds of this family,” he said.The Royal Caribbean Freedom of the Seas cruise ship was docked in San Juan, Puerto Rico, at the time of the accident, according to the Puerto Rico Department of Public Safety. The cruise line has had little to say about the accident.”This was a tragic incident, and out of respect for the family’s privacy, we refer you to authorities for further comment,” Royal Caribbean said in a statement Monday.Chloe was the daughter of a South Bend, Indiana, police officer, Alan Wiegand. On Monday, the Fraternal Order of Police in South Bend strongly criticized the charges against Anello and said they should be dropped.”The charges filed in Puerto Rico today are appalling and do nothing but revictimize a family who experienced a horrific loss,” Harvey Mills, South Bend FOP President said in a statement. “Based on the facts, it sounds like the negligence in this tragedy came from the cruise ship, not the family. The South Bend FOP stands in support of Officer Alan Wiegand and his family and urges Puerto Rican authorities to drop these unnecessary charges.”Mills’ organization previously raised money to help the family pay for Chloe’s funeral and said Monday that any future money raised would go toward the legal defense for Chloe’s grandfather.Copyright © 2019, ABC Audio. All rights reserved.