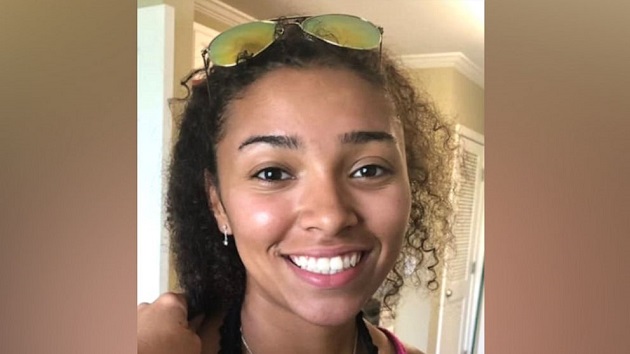 (AUBURN, Ala.) — Police have recovered a vehicle belonging to a missing Alabama college student, but said there was still no sign of the 19-year-old as of Monday afternoon.Investigators found Aniah Haley Blanchard’s 2017 Honda CRV at an apartment complex in Montgomery at around 6 p.m. local time on Friday after a resident reported it to police. The vehicle had damages to the front left tire, which are believed to have occurred between the time she was last seen and Friday when the vehicle was found, according to the Auburn Police Division. Blanchard, a student at Southern Union State Community College in Wadley, was reported missing by her family on Oct. 24. Police said she last communicated with a friend on Oct. 23, just before midnight.Blanchard’s father, Elijah Blanchard, said his daughter “would not leave” without telling anyone.”She always calls me at the end of the day to see how my day was,” Elijah Blanchard told ABC News in an exclusive interview Monday evening. “She would never not contact somebody and let them know what she’s doing.”He described his daughter as “very ambitious,” “very organized” and “fun to be around.””If someone would see Aniah out, they would know something was wrong if she didn’t carry that beautiful smile that she always has,” he said.Blanchard’s stepfather, UFC heavyweight fighter Walt Harris, shared images of her on his Instagram page Thursday, asking members of the public to please come forward with information.”Please help find my baby Aniah Blanchard. She is missing [in] Auburn,” Harris, one of the top UFC contenders in the heavyweight division, told his nearly 30,000 followers. “Please help!!!! Any info message me on here or call the Auburn police … PLEASE SHARE THIS!!!!”Blanchard is described as a light-complexioned black female with brown eyes and brown hair who is 5 feet 6-inches tall and about 125 pounds. She was last seen wearing a black dress and tan duck boots with black stockings, according to police.The Auburn Police Division, as part of the ongoing joint investigation with the Montgomery Police Department, have released a snippet of a surveillance video showing Blanchard making a purchase at a convenience store on South College Street, which runs through downtown Auburn, on Oct. 23, just prior to her car being observed traveling southbound on the same road.Police have also shared images of Blanchard’s vehicle, a black mini SUV, and urged anyone with information about a possible collision to call its headquarters.”While the vehicle has been recovered, Blanchard has not been located,” the Auburn Police Division said in a recent statement. “The investigation is continuing, and anyone with information regarding Aniah’s whereabouts is being asked to call the Auburn Police Division Detective Section at 334-501-3140, the anonymous tip line at 334-246-1391 or the 24-hour non-emergency number at 334-501-3100.”