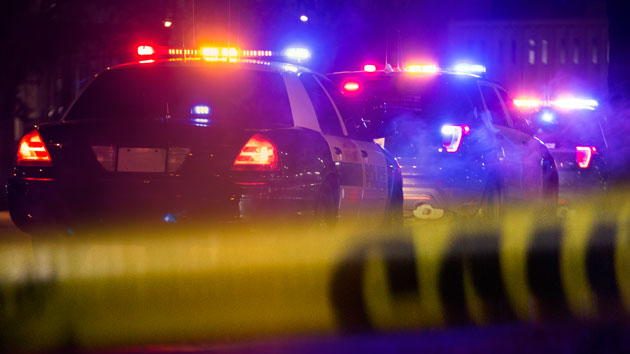 (GREENVILLE, Texas) — A manhunt was launched Sunday for a gunman who opened fire at a crowded football homecoming party for Texas A&M Commerce, killing two young people and leaving 16 others injured before escaping into what the local sheriff described as “mass chaos.”About 750 people were at an off-campus party venue in Greenville, Texas, celebrating the Texas A&M Commerce football team’s homecoming victory on Saturday over Western New Mexico when gunshots erupted just after midnight, Hunts County Sheriff Randy Meeks said at a news conference Sunday morning.Meeks said the unidentified gunman entered the venue through a back door and immediately shot one man and then turned his gun on the crowd of partygoers, many dressed in Halloween costumes, Meeks said. A sheriff’s department spokesman initially said the gunman was armed with a semi-automatic rifle, but Meeks said the preliminary investigation determined the killer opened fire with a handgun.He also said there were fake bullets scattered around the floor of the venue, apparently as part of the party decorations.While investigators have yet to establish a motive for the shooting, Meeks said they do not believe the community at large is in imminent danger.”His first victim, we think, may have been his target victim and the rest of them are just random,” Meeks said. “That’s just our theory right now, right off the get-go.”The two people killed were both men. Their names were not immediately released, pending notification of next of kin, Meeks said.Meeks said investigators were having a difficult time getting a description of the suspect from surviving victims and witnesses, adding that many were being uncooperative or were too intoxicated to speak with detectives.”It appalls me that with that many folks there no one has given us a better description of the shooter,” Meeks said.He asked parents of witnesses to get their children to give investigators information about the shooter.”We need to get him off the street as soon as possible,” Meeks said. “We need as much information as we can, as soon as we can.”The Federal Bureau of Investigations (FBI), the Bureau of Alcohol, Tobacco, Firearms and Explosives (ATF) and the Texas Rangers were helping in the search for the gunman.Meeks said the party was not sanctioned by Texas A&M Commerce. He said the event was hosted by a group called Good Fellows out of Commerce.Many of those in attendance were believed to be Texas A&M Commerce students, as well as young people from surrounding communities, including Fort Worth, Dallas, and Arlington. He said victims ranged in age from late teens to early 20s.He said four or five Texas A&M Commerce were injured.The shooting unfolded at 12:05 a.m., about 15 minutes after a Hunts County sergeant and one deputy responded to the party venue upon receiving a complaint that vehicles were illegally parked on the shoulder of nearby Highway 380, Meeks said.He said one police officer from the neighboring town of Farmersville was working security at the party when the Hunts County sergeant and a deputy arrived just before midnight.The three law enforcement officers were in the parking lot in front of the building when the shooting broke out toward the rear of the facility, Meeks said.The gunshots sent partygoers into a panic and some broke windows to get out of the building, Meeks said. He said one person jumped from a window and was injured by broken glass. Meeks said the gunman apparently escaped by blending with the crowd rushing out the doors.”It was mass chaos with people trying to exit the building,” Meeks said. “Some of the injuries were from broken glass. There were four abreast trying to get out the front door, which is a regular opening.”The sheriff’s said the deputies on the scene when the shooting erupted never laid eyes on the gunman.He said 12 of the 16 people injured suffered gunshot wounds.As officers from surrounding agencies raced to the venue, the sheriff’s deputies already there administered first aid to the wounded.Meeks said the sheriff’s sergeant placed one victim who was in bad shape in his patrol vehicle and rushed that person to a local hospital.”I believe their actions may have saved lives,” Meeks said of his deputies.Other wounded victims were taken to hospitals in private cars, he said.One injured person was taken by emergency helicopter to a hospital in Plano, about 50 miles away, Meeks said”When you have this many people in one place, it’s an easy target for somebody,” Meeks said.Copyright © 2019, ABC Radio. All rights reserved.

James Michael Tyler, “Gunther” on ‘Friends,’ dead at 59
1 dead, 7 injured in shooting at off-campus party near Georgia university
Ride to the Olympics CEO on increase in Black polo players: ‘We break barriers’
Halyna Hutchins, cinematographer killed on the ‘Rust’ set, was a “rising star” in the film world
Amazon workers in Staten Island say they’re planning to file for union election
David Boreanaz on looking back at 9/11 on Sunday night’s ‘SEAL Team’