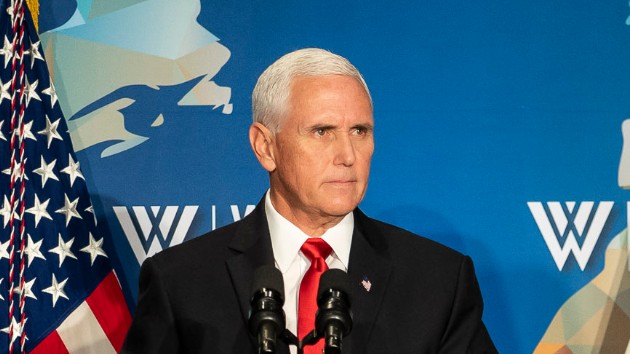 (WASHINGTON) — Vice President Mike Pence has accused the NBA and Nike of bowing down to the Chinese government at the expense of American values in order to make money. “Some of the NBA’s biggest players and owners, who routinely exercise their freedom to criticize this country, lose their voices when it comes to the freedom and rights of the people of China,” Pence said Thursday during an address in Washington. “In siding with the Chinese Communist Party and silencing free speech, the NBA is acting like a wholly-owned subsidiary of the authoritarian regime.”The speech came as President Donald Trump seeks to close a new trade deal with China.Pence said the NBA failed to support freedom of speech for when they didn’t fully back Houston Rockets General Manager Daryl Morey, after he tweeted in support of protesters in Hong Kong. The tweet prompted a fierce backlash in China and led Nike to remove Rockets merchandise from its stores in China.”Nike promotes itself as a so called ‘social justice champion,"” Pence said, “but when it comes to Hong Kong, it prefers checking its social conscience at the door.”The vice president called censoring speech “un-American” and said “a progressive corporate culture that willfully ignores the abuse of human rights is not progressive — it is repressive.”Trump earlier this month said the NBA had “to work out their own situation” but noted some coaches “were pandering to China” and it was “like they don’t respect” the United States.Pence’s comments came during an expansive speech on the Trump administration’s view of China’s rise in the world.The Trump administration does not believe that “economic engagement alone” would transform China’s communist government into a “free and open society,” he said.But Pence added that “the United States does not seek confrontation with China,” but rather, “a level playing field, open markets, fair trade, and a respect for our values.”He took a swipe at China’s Belt and Road initiative, which he said was “ostensibly for commercial purposes” around the world — but warned “those purposes could eventually become military.””We see now the flag of Chinese ownership flying today in ports from Sri Lanka to Pakistan to Greece,” Pence said.Copyright © 2019, ABC Audio. All rights reserved.