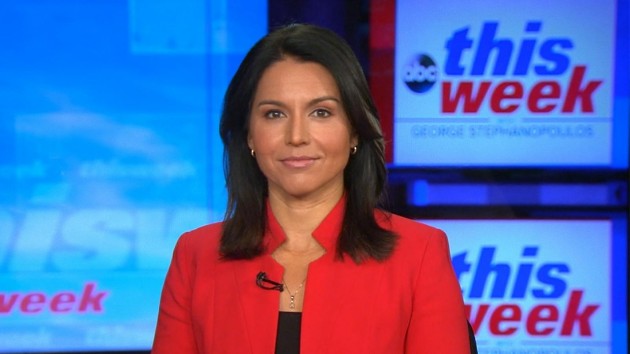 (WASHINGTON) — In a new video released after midnight on Thursday and an email to her supporters, Hawaii Rep. Tulsi Gabbard said she will not run for re-election in her district in 2020.She has been facing one of the toughest primary challenges of her career from Hawaii state Sen. Kai Kahele, who wished her good luck in a tweet Friday morning.”I wholly respect and appreciate Congresswoman Gabbard’s decision not to pursue re-election for her Congressional seat as she pursues the Presidency,” he wrote. “I wish her and her family the best going forward.”Gabbard, in the release, said, “I will not be seeking re-election to Congress in 2020, and humbly ask you for your support for me candidacy for President of the United States.”

Today I’m officially announcing that I will not be seeking reelection to Congress in 2020. Throughout my life, I’ve always made my decisions based on where I felt I could do the most good. In light of the challenges we face, I believe I can … pic.twitter.com/F0StYoA66n

The congresswoman highlighted her anti-war stance and argued that her views would be best put to use as Commander-in-Chief.“As President, I will immediately begin work to end the new Cold War and nuclear arms race, end our interventionist foreign policy of being the world’s police, toppling dictators and governments we don’t like, and redirect our precious resources towards serving the needs of the people here at home,” she said.This decision comes as many speculate that she will run as a third-party candidate should she fail to net the Democratic nomination to the White House.Gabbard however contends she plans on remaining a democrat not not running a third party bid, as she told more than 400 woman on Tuesday during Fortune’s annual Most Powerful Women Summit in Washington.She also appeared on Fox News with Sean Hannity before her announcement, expressing her concern about the current nature of the impeachment inquiry of President Donald Trump in the House. Gabbard argued that the process has not been transparent.“I thought it should be a transparent process, but I long expressed my concern about going through impeachment proceedings in a very, very partisan way because it will only further tear apart an already divided country,” Gabbard said.On the “Sean Hannity Show,” Gabbard said “it must be done transparently. I don’t know what’s going on in those closed doors. We as members of Congress do not have access to the information that’s being shared. I think the American people deserve to know exactly what the facts are, what evidence is being presented as this inquiry goes on.”In late September, Gabbard was the last Democrat to announce her support of the inquiry.“So it is unfortunate, but necessary, that I speak in support of the inquiry into the President’s alleged abuse of power in relation to his interactions with Ukraine’s leaders. This inquiry must be swift, thorough, and narrowly-focused. It cannot be turned into a long, protracted partisan circus that will further divide our country and undermine our democracy,” Gabbard said in the Sept. 27 press release.Gabbard has not yet qualified for the next Democratic presidential debate set to take place in Georgia on Nov. 20.Copyright © 2019, ABC Audio. All rights reserved.

Legacy and landscape at stake for Pelosi, Biden: The Note
Anita Hill reflects on Clarence Thomas testimony, her 30-year fight against gender violence
“I got my a** kicked for speaking up”: Katherine Heigl supports union by revisiting controversial comments
Police investigate ‘suspicious’ death of mother and child at Padres stadium in San Diego
Three dead, over 50 injured in Amtrak train derailment
‘Shang-Chi and the Legend of the Ten Rings’ dominates box office for fourth straight week