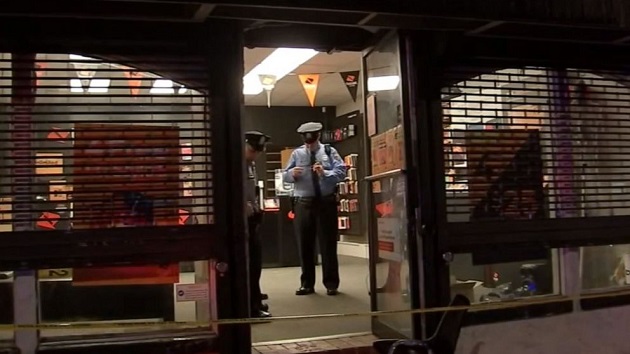 (PHILADELPHIA) — A quick-thinking cellphone store employee is being credited with thwarting a robbery after he trapped the would-be thief by locking him in the store.”If all robbers were this dumb, our jobs would be a lot easier,” a veteran police detective told Philadelphia ABC station WPVI-TV after the suspect was arrested at a Boost Mobile store in North Philadelphia.Store employee Jitendra Kumar-Sas told WPVI that he was the only clerk on duty when the man entered the store at about 5:30 p.m. Tuesday and pulled a gun on him.”He take a gun and put it at my head. ‘Hey, give me the money, how much money you have?"” Kumar-Sas said the man told him.Thinking fast, the clerk told the intruder that he had no cash — but he could get some.”‘Can you wait a few minutes, I give you money, I have another employee outside,"” Kumar-Sas said he told the man.Amazingly, the would-be thief agreed to wait inside the store. But as soon as Kumar-Sas got outside, he locked the door, pulled down the metal gate, and ran.”I closed the door and put the shutter down,” he said.When the man realized he was trapped, he fired 10 shots at the door in an effort to get out, police said. Then, when that didn’t work, he began banging on the door to the business next door.”He kept banging and banging on our door, he shot to see if he could open the lock, but he couldn’t get in. So we were really scared,” Dianna Sullivan, who works next door, told WPVI.By then a SWAT team had arrived.”SWAT, using a bullhorn, yelled this individual’s name, told him to come out and let him know the futility of his actions, that he was trapped inside,” said Chief Inspector Scott Small with the Philadelphia Police Department.Authorities said the suspect, 19, eventually surrendered. He was expected to be charged with attempted robbery, firearms violations, aggravated assault and other related offenses.Nobody was hurt in the incident, which Small credited to Kumar-Sas’ quick thinking.”The store employee acted very bravely,” the inspector said. Copyright © 2019, ABC Audio. All rights reserved.

COVID-19 live updates: Hospitalizations reach all-time high in this US state for 2021
Democrats lash out at Biden administration over handling of Haitian migrants
Mom dying of ovarian cancer shares what she wants women to know about the deadly disease
First ‘SNL’ guests of the season: Owen Wilson, Kim Kardashian West, Rami Malek, and Jason Sudeikis
Jada Pinkett Smith celebrates 50th birthday on ‘Red Table Talk’; ABC to adapt Baratunde Thurston’s ‘How to Be Black’
“No one is safe. Not one of you.”: Johnny Depp decries ‘cancel culture’