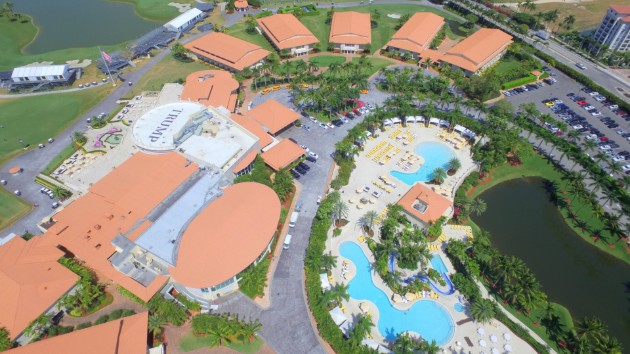 (WASHINGTON) — President Donald Trump on Monday defended his decision to host next year’s Group of 7 summit at the Trump National Doral Miami — a decision he reversed over the weekend after both Republicans and Democrats objected — claiming the site was chosen for its convenience and not because it would have benefited him personally. “I was willing to do this for free. And it would’ve been the greatest G-7 ever,” Trump told reporters at a White House Cabinet meeting. “It’s not because it’s mine,” he said. “It’s a beautiful place, it’s new, it’s been totally rebuilt. It’s new. Everything’s good. It’s got massive meeting rooms. Unlimited for security, because it is on, you know, hundreds of acres. Best location.”Over the weekend, critics derided the decision to host the annual meeting of most of the world’s largest economies at a resort run by the Trump Organization as a violation of the Constitution’s Emoluments Clause — which bars a president from receiving payments from foreign governments or otherwise financially benefiting while in office beyond a president’s salary — without permission from Congress.Trump on Monday tried to brush away those concerns, saying the initial decision to hold the summit at the Doral club wasn’t about promotion because he’s already received more promotion “than any human being that has ever lived.”“I don’t think you people with this phony Emoluments Clause — and by the way, I would say that it’s cost me anywhere from two to five billion to be president,” he said.White House acting Chief of Staff Mick Mulvaney announced the selection of Trump National Doral Miami as the 2020 G-7 venue during a press briefing on Thursday, saying at the time that it was the president who initially pitched the property as a potential hosting site and that it would be made available “at cost.””We sat around one night, we were back in the dining room and — going over it with a couple of our advance team, we had the list (of potential sites),” Mulvaney said. “And he goes, what about Doral? And I was like, that’s not the craziest idea. It makes perfect sense.”Trump reversed course just two days later, announcing via tweet that he was rescinding his decision to host the G-7 at Doral due to what he called “Crazed and Irrational Hostility” from the press and Democratic party. Trump, however, was reportedly swayed by disapproval from members of his own party.”He was honestly surprised at the level of pushback,” Mulvaney said on Fox News Sunday. “I think it’s the right decision to change. We’ll have to find someplace else.”Despite Trump’s claims that the opportunity to promote his family’s brand did not factor into his decision making because they didn’t need it, a branding expert told ABC News that the mere act of hosting an event of this scale at a Trump-branded property has historically been a boon for business.”You want to know who benefits? The president benefits. His properties benefit,” said Robert Passikoff, the founder and president of Brand Keys, Inc. “And this is proven out over and over again in actual market studies.”Democrats in the House of Representatives, for their part, introduced on Friday a bill specifically written to block Trump from holding the G-7 at Doral. Voting on that bill would have put Republicans’ approval or disapproval on the record.It was not immediately clear which locations the White House is considering to replace Doral, though Mulvaney on Thursday mentioned sites in Hawaii and Utah. In his Saturday tweet, Trump mentioned Camp David as another option. Copyright © 2019, ABC Audio. All rights reserved.

‘Because they can get away with it’: Why African Americans are blamed for crimes they didn’t commit: Experts
As states protect nursing homes from lawsuits, families fear they have little recourse
Pentagon has troops on 4-hour standby to go to Minneapolis if needed
How some cities plan to increase outdoor dining as restaurants reopen
Sen. Klobuchar’s past as prosecutor looms over vice presidential prospects
Trump again stokes racial divides, a reality at odds with his efforts to court black voters