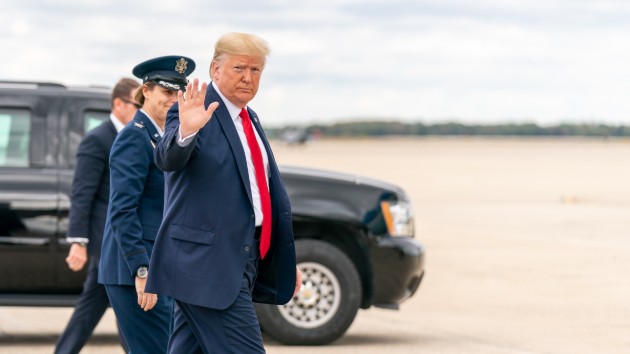 (WASHINGTON) — President Donald Trump’s longtime ally, Republican Sen. Lindsey Graham, said he would not rule out the possibility of impeachment if new evidence emerges from an investigative probe that is looking into Trump’s dealings with Ukraine. “Sure, I mean show me something that is a crime,” the Republican from South Carolina said during an interview that aired on Axios on HBO Sunday. “If you could show me that, you know, Trump actually was engaging in a quid pro quo outside the phone call — that would be very disturbing.”Graham was speaking about Trump’s request to Ukraine’s president in a July phone call for help investigating former Vice President Joe Biden and his son Hunter. Graham has previously said there was no quid pro quo during the phone call.His latest comments on the impeachment probe come as other Republicans on Capitol Hill have expressed growing concern over the president’s alleged actions.Last week, Sen. Lisa Murkowski, R-Alaska, told reporters she was concerned about acting White House chief of staff Mick Mulvaney’s comments that Ukrainian aid was held up until the Ukrainian government would help find dirt on Biden.”Yes, absolutely that’s a concern,” Murkowski told reporters. “You don’t hold up foreign aid that we had previously appropriated for a political initiative. Period.”Another Republican — Sen. Mitt Romney of Utah — blasted Trump in a separate interview that also aired on Axios on HBO for calling on China to investigate the Bidens.”I don’t think there’s any question, but that going on TV, on the White House lawn and saying, ‘China, will you investigate my political opponent?’ is wrong. It’s a mistake,” Romney said. “It was shocking for, in my opinion, for the president to do so and a mistake for him to do so. I can’t imagine coming to a different point of view. We certainly can’t have presidents asking foreign countries to provide something of political value. That is, after all, against the law.”On Monday, Trump lashed out at Republicans for not defending him.”Republicans have to get tougher and fight. We have some very great fighters, but they have to get tougher and fight,” Trump said during a Cabinet meeting Monday.He praised Democrats for their unity on impeachment, while noting that Democrats don’t have politicians like Romney to worry about.”I think they are lousy politicians,” Trump said. “But two things that they have, they are vicious. And they stick together. They don’t have Mitt Romney in their midst.””They don’t have people like that. They stick together. You never see them break off,” Trump added.In recent weeks, Republicans have grown increasingly concerned with the administration’s foreign policy moves after Trump announced U.S. troops would leave northern Syria, opening the way for an invasion by Turkey.”My goodness, the lack of preparation and thinking about how we could have transitioned to a setting where we can protect the Kurds and also hopefully meet Turkey’s needs and interests — that’s something we should have considered a long time ago before we pulled our troops out,” Romney said.”But now, to go over and say let’s talk to [Turkish President Recep Tayyip] Erdogan is like, ‘Hey guys, you let the horses out of the barn.’ This is too late to be talking about locking the barn door,” he added.Some Republicans were wary on the heels of an announced ceasefire in northern Syria between Turkish forces, their allies and U.S.-backed Syrian Kurds.”It does not appear to me, however, with all due respect, that this is really a ceasefire,” Sen. Marco Rubio, R-Fla., said on the Senate floor last week. “It is more an ultimatum because what it basically is saying is Erdogan is saying here’s land that I intend to take, I intend to drive every Kurd out of this area and I intend for Turkey to control this area in northern Syria as a security zone — as he calls it.”Copyright © 2019, ABC Audio. All rights reserved.