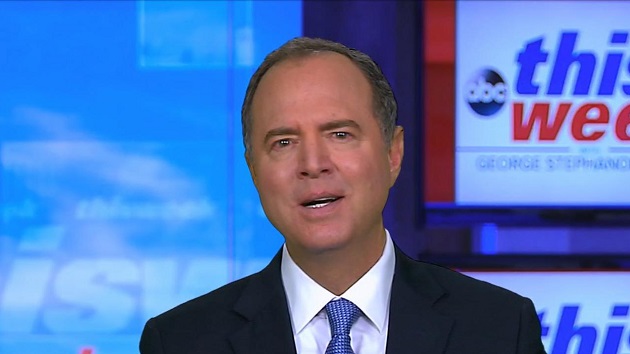 (WASHINGTON) — House Republicans on Monday pushed for a vote to censure Rep. Adam Schiff, the chairman of the House Intelligence Committee leading the Democrats’ impeachment probe of President Donald Trump, but Democrats successfully tabled the motion in a 218-185 party line vote. Rep. Francis Rooney, R-Fla., who made headlines this weekend after criticizing some of the president’s actions and endorsing additional investigation, did not vote. The vote to censure — a statement of disapproval with no legal consequences — was part of an overall White House and GOP effort to discredit the probe as unfair.”It will be said of House Republicans,” Schiff tweeted shortly after the vote was tabled, “When they found they lacked the courage to confront the most dangerous and unethical president in American history, They consoled themselves by attacking those who did.”Republicans, who have called on Democrats to conduct their inquiry in public rather than in closed-door depositions, have taken particular aim at Schiff’s comments at a hearing last month with acting Director of National Intelligence Joseph Maguire.In his opening statement at that hearing, the California Democrat summarized Trump’s call with the Ukrainian president, saying the rough transcript the White House released the day before read like a “crime shakedown.””Shorn of its rambling character and in not so many words, this is the essence of what the president communicates,” Schiff said, as he went on to parahrase what was in the transcript — not quoting it directly.”I hear what you want,” Schiff continued as he gave his version of the call. “I have a favor I want from you, though, and I’m gonna say this only seven times, so you better listen good. I want you to make up dirt on my political opponent, understand? Lots of it — on this and on that.”Republicans immediately criticized Schiff, and Trump accused him of lying to Congress, while Schiff pointed out in the hearing that his opening statement “was meant to be at least part in parody,” and not direct quotes.The GOP censure resolution read, in part, “this egregiously false and fabricated retelling had no relationship to the call itself” and “these actions of Chairman Schiff misled the American people, bring disrepute upon the House of Representatives, and make a mockery of the impeachment process, one of this chamber’s most solemn constitutional duties.”The resolution also seeks to condemn Schiff for claiming the whistleblower had no contact with the House Intelligence Committee prior to filing the complaint.”We have not spoken directly with the whistleblower,” Schiff told MSNBC on Sept. 17.The New York Times later reported that the whistleblower had contacted Schiff’s Intelligence Committee — and spoken with committee staff — for guidance on how to report Trump’s possible wrongdoing, and that Schiff knew about this communication.On Oct. 4, after this news came to light, a Washington Post fact-check gave Schiff four Pinocchios for making false statements. A committee representative told the Post that Schiff “acknowledges that his statement should have been more carefully phrased to make that distinction clear.”Schiff appeared on CBS’ Face the Nation Oct. 13, making a similar statement.”I should have been much more clear, and I said so the minute it was brought to my attention,” Schiff told CBS anchor Margaret Brennan. “That — I was referring to the fact that when the whistleblower filed the complaint, we had not heard from the whistleblower. We wanted to bring the whistleblower in at that time, but I should have been much more clear about that.”That acknowledgement has not stopped Trump from repeatedly criticizing Schiff’s leadership and honesty.During a White House photo op on Monday, just hours before the vote to censure Schiff, Trump brought Schiff’s and the impeachment inquiry up again, calling him “shifty Schiff” and even went so far as to suggest, with no evidence, that Schiff was the informant who went to the whistleblower in the first place.Earlier on Monday, Trump tweeted his support of the House Republicans’ censure resolution.”Censure (at least) Corrupt Adam Schiff! After what he got caught doing, any pol who does not so vote cannot be honest…..are you listening Dems?” the president tweeted.Schiff and other Democrats have defended their handling of the impeachment probe, arguing last week that the initial investigative work needs to be done behind closed doors to prevent witnesses from coordinating their accounts of key events.”I’m sure the president would like nothing better than for witnesses to … know what others are saying,” he said.Schiff also said the committees would hold open hearings with new and returning witnesses, and said Republicans have been “completely represented” in all depositions. Copyright © 2019, ABC Audio. All rights reserved.