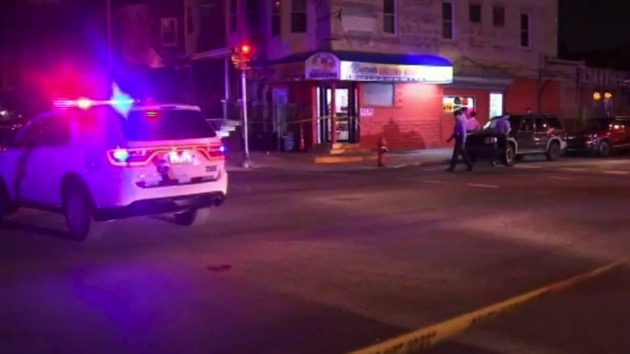 (PHILADELPHIA) — A 2-year-old girl was shot in the head and died in her mother arms one day after an 11-month-old boy was shot four times and critically wounded — and Philadelphia police are now begging for the public’s help to solve both cases.The first shooting was Saturday night when the 11-month-old boy, who was in the back of a car, was shot once in the head, once in the neck and twice in the buttock, said Capt. Nicholas Brown of the Philadelphia Police Department.The baby boy is in “very, very critical condition,” Brown said at a news conference on Monday.He has no chance for a full recovery and if he survives he most likely will be a quadriplegic, Brown said.Someone else in the car may have been the intended target, Brown said.The next day, a 2-year-old girl was in her home, in her mother’s arms, when she was shot in the head, police said. She died at the scene.Her mother and another person in the home were injured, said police.A gunman had fired an automatic rifle through the front of the house, leaving six bullet holes, said police.Authorities said it is “safe to assume” the house was targeted, but that the motive for both shootings are not clear.A $30,000 reward has been offered for information that helps solve either of the crimes.Police Commissioner Christine Coulter noted that these shootings — in a car and in a home — are traumatic for other local children and “can’t help but shock and upset their sense of security.””You should always feel you’re OK in your home,” Coulter said. “You should feel when you’re with your parents you’re safe … it just makes it even more upsetting.”The community and law enforcement were also feeling the impacts.”It was so evident looking at the neighbors and the despair on their faces and the tears in the eyes of the police officers,” Coulter said.”These scenes should not continue to happen in our city … we have to do better,” Coulter said. “Please help us start reducing this violence and keeping our children safe.”Philadelphia Mayor Jim Kenney said at the news conference that weapons are “flowing” into the city “like a river.””Outraged, disgusted, and heartbroken by the violence this weekend that claimed the life of an innocent 2-year-old and left another infant fighting for his life,” Kenney tweeted Sunday. “Philadelphians should not live in fear of violence that could take away a child’s life. But for too many, this is a sad reality. With the unabated flow of illegal guns and drugs, we must do whatever we can locally to address violence and help residents.””I urge the public to come forward and report any information they have about these and other violent crimes,” the mayor tweeted. “The anonymous tip line is 215-686-TIPS.”Copyright © 2019, ABC Audio. All rights reserved.