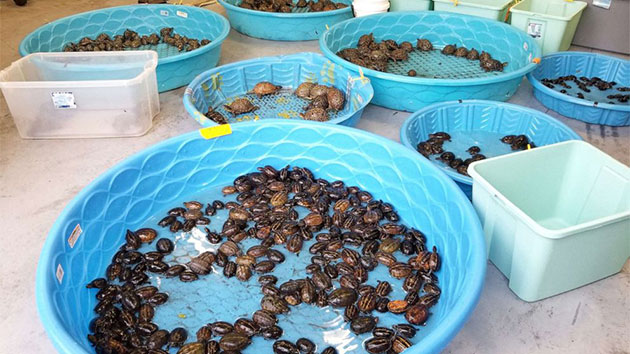 (WASHINGTON) — Florida wildlife officials have uncovered a trafficking ring of thousands of smuggled turtles following a long-term undercover investigation. Two suspects have been charged for poaching the turtles, most of them native to Florida, and selling them illegally, according to a news release by the Florida Fish and Wildlife Conservation Commission. Many of the turtles ended up in international markets, including those in Asia, officials said.The FWC launched the investigation in February 2018 after receiving a tip from the public. Investigators determine that a “ring of well-organized wildlife traffickers” was catching and selling the turtles to large-scale reptile dealers and illegal distributors, who would then ship most of them overseas on the black market, according to the release.One of the suspects, 39-year-old Fort Myers resident Michael Boesenberg, allegedly directed others to collect the turtles in “large numbers.” Once they “had enough,” they would then sell them to a buyer with links to Asian markets, FWC officials said.The turtles were sold wholesale for up to $300 each and retailed for as much as $10,000 in Asia. In one month alone, an estimated $60,000 worth of turtles were trafficked out of Florida, according to the FWC.xWhile the turtles were mostly sold for cash, the poachers would occasionally trade them for marijuana products, officials said.The poachers would target habitats known for specific species of turtles and “depleted the species so much” that they had to expand to other parts of the state, according to the FWC. Lee County, the primary location of the poachings, was the most heavily impacted, but the affect on the wild turtle population overall stretched beyond the state.”Wild turtle populations cannot sustain the level of harvest that took place here,” said Dr. Brooke Talley, the Reptile and Amphibian Conservation Coordinator for the FWC. “This will likely have consequences for the entire ecosystem and is a detriment for our citizens and future generations.”Turtles are one of the most threatened animal groups on the planet, Dr. Craig Stanford, Chairman of the International Union for the Conservation of Nature’s Tortoise and Freshwater Turtle Specialist Group, said in a statement.”The illegal trade of turtles is having a global impact on many turtle species and our ecosystems,” FWC Executive Director Eric Sutton said in a statement. “We commend our law enforcement’s work to address the crisis of illegal wildlife trafficking.”More than 600 turtles were returned to the wild as a result of the investigation, and about half of those are now part of a long-term monitoring project by the Sanibel-Captiva Conservation Foundation, which has been conducting research on them for almost 20 years, officials said.About two dozen turtles were at first quarantined and released at a later date, but a handful of them were retained by a captive wildlife licensee, since they were not native to the area, officials said.The illegal commercialization of wildlife ranks fourth in trafficking in the U.S. behind guns, drugs and human smuggling, according to the release. Illegal wildlife trade is estimated to be worth $19 billion annually, according to the International Fund for Animal Welfare.Col. Curtis Brown, head of the FWC’s Division of Law Enforcement, described the thwarting of the trafficking ring as “a significant win for conservation.”ABC News could not immediately reach Boesenberg or an attorney for him for comment. The other suspect who was charged was not identified. Copyright © 2019, ABC Audio. All rights reserved.