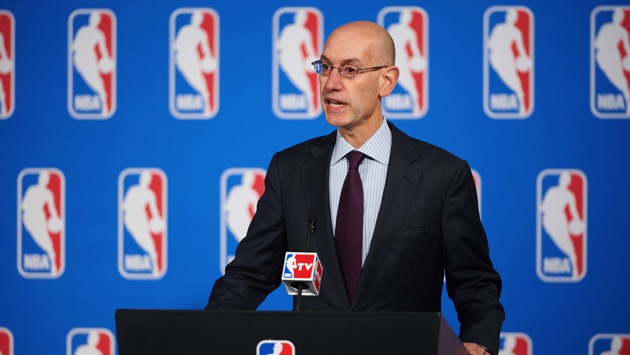 (NEW YORK) — NBA commissioner Adam Silver said the league has suffered “substantial” losses in China as a result of the firestorm that followed a since-deleted tweet by the Houston Rockets general manager supporting the Hong Kong protests.”The losses have already been substantial,” Silver said in an interview with ABC News’ Robin Roberts at the TIME 100 Health Summit on Thursday, adding that, “I’m not even sure where we’ll go from here.”“The financial consequences have been and may continue to be fairly dramatic,” he added in his first stateside interview since the NBA became embroiled in controversy in China.Silver maintained, however, that the league is “not only willing” but “we are” taking these financial losses in China to stand for “American values” such as freedom of expression — and that they did not bow to Chinese pressure to fire the manager.”The values of the NBA, these American values, we are an American business, travel with us wherever we go, and one of those values is free expression,” he said.On Oct. 4, Rockets general manager Daryl Morey tweeted in support of pro-democracy demonstrators in Hong Kong — setting off a series of consequences that illuminated the political challenges U.S. companies can face as they navigate doing business in China’s growing, lucrative market.While the tweet was quickly deleted, China’s state-run broadcasting network ordered a blackout of NBA coverage. China’s internet giant Tencent, which inked a five-year, $1.5 billion deal in August to stream NBA games, also announced that they would not play Rockets games.Morey has since apologized. The Rockets owner Tilman Fertitta said that Morey does not speak for them. Rockets players James Harden and Russell Westbrook apologized at a news conference, with Harden adding, “We love China, we love playing there.”NBA star player LeBron James also weighed in, telling reporters that he thought Morey “wasn’t educated on the situation at hand” and that “so many people could have been harmed not only financially, physically, emotionally, spiritually” by his tweet.After his comments were met with criticism, James later tweeted: “Let me clear up the confusion. I do not believe there was any consideration for the consequences and ramifications of the tweet. I’m not discussing the substance. Others can talk about that.”Prior to Morey’s tweet, the Rockets were one of the most beloved teams in China, and where retired Chinese basketball star Yao Ming played in the states.In the aftermath of his tweet, however, a series of NBA events in China — including charity events — were abruptly canceled, and video on social media emerged of NBA posters being ripped off the side of buildings.The financial fallout has also been swift and dramatic, but Silver said Thursday that the NBA is willingly taking those losses.Silver said the NBA was pressured to fire Morey, but they chose to take a stand.”We were being asked to fire him by the Chinese government, by parties we dealt within government and business,” Silver said. “We said there is no chance that’s happening; there’s no chance we’ll even discipline him.”Still, Silver said that “our games are not back on the air in China as we speak. We’ll see what happens next.””I understand that there is a point of view from some that we shouldn’t be in business at all in China, and I’d say from an intellectual standpoint that’s fair, not getting into whether the tweet and the response to it,” he said.”At some point, look to the American government, we are in the middle of negotiating a trade agreement,” he added. “Many multinational corporations obviously trade extensively with China.”Silver said that for years he has believed, however, that sports have been a way to “bring people together, often in a way that governments don’t.”He added that he has been traveling to China for NBA events for years and he hopes to keep finding “a commonality” with the Chinese people.”When you build that commonality over time, it potentially leads to shared understanding, empathy, begins dialogues …. often things that aren’t happening at high levels among official government operatives or diplomats,” Silver said.Copyright © 2019, ABC Audio. All rights reserved.