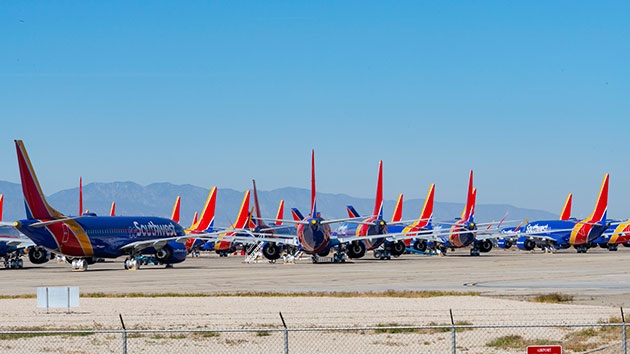 (NEW YORK) — Internal messages between two Boeing pilots appear to show the company knew about problems with an automated system in the 737 Max aircraft in 2016, two years before two separate crashes involving the Max killed 346 people. In a document obtained by ABC News, Boeing’s chief technical pilot, Mark Forkner, told a colleague that the plane’s MCAS system was “running rampant in the sim on me.” Forkner said in the messages that in the simulation the MCAS was “trimming itself craxy,” likely meaning “crazy,” and that it was “egregious.” News of the internal messages was reported earlier by The New York Times.The maneuvering characteristics augmentation system, or MCAS, is an automated flight control system designed to change the angle of an airplane to prevent a stall. Faulty MCAS systems are believed to have caused the Lion Air crash in Indonesia, which killed 189 last October, and the Ethiopian Air disaster in March that killed 157.After those incidents, the aircraft was grounded pending additional safety certifications.The FAA obtained the messages last night in a document from Boeing, and FAA Administrator Steve Dickson sent a letter to Boeing CEO Dennis Muilenburg requesting an immediate explanation. Dickson also requested an explanation about the delay in disclosing the document to the FAA because it was his understanding that “Boeing discovered the document in its files months ago.”In a statement, the FAA said that the agency finds the document’s contents disturbing and that regulators are “disappointed that Boeing did not bring this document to our attention immediately upon its discovery.”Peter DeFazio, D-Ore., chair of the House Transportation committee, said in a statement that the conversation between Boeing employees is “shocking, but disturbingly consistent with what we’ve seen so far in our ongoing investigation of the 737 Max, especially with regard to production pressures and a lack of candor with regulators and customers.”Muilenburg is scheduled to appear before Congress later this month.”Over the past several months, Boeing has been voluntarily cooperating with the House Transportation & Infrastructure Committee’s investigation into the 737 Max,” the company said in a statement on Friday. “As part of that cooperation, today we brought to the Committee’s attention a document containing statements by a former Boeing employee. We will continue to cooperate with the Committee as it continues its investigation. And we will continue to follow the direction of the FAA and other global regulators, as we work to safely return the 737 Max to service.” Copyright © 2019, ABC Audio. All rights reserved.

After people spoke out about COVID-19 vaccines and period changes, research is underway
James Marsden jokes about 15-year gap between ‘Enchanted’ and ‘Disenchanted’: “I never felt older”
Details on fatal Route 28 car vs motorcycle crash
Mom dying of ovarian cancer shares what she wants women to know about the deadly disease
Tonight on ABC: ‘The Wonder Years’
Biden admin missed red flags before Haitian migrant surge