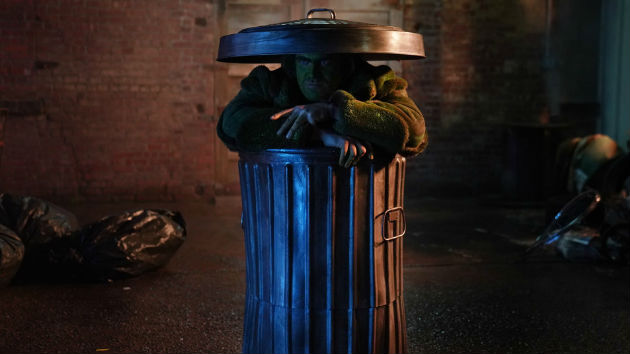 (NEW YORK) —  In what’s already being praised online as one of their best parodies in years, Saturday Night Live over the weekend tackled the box office hit Joker head-on with their own twisted origin story.

Guest host David Harbour stars in the trailer for Grouch, playing the human version of the garbage-loving Sesame Street character.  In this case, Oscar’s a garbage collector in the neighborhood, with a darker, dirtier version of Sesame Street standing in for Gotham City that Guy Smiley — the character now a TV news anchor for “ABCDEFG News” — describes as a “haven of crime and corruption.”

And times are indeed rough for all of the familiar Sesame Street characters.  Prairie Dawn is a prostitute and Mister Snuffleupagus is her pimp, while Ernie gets knifed in an alley when he won’t give up his rubber duckie and dies in Bert’s arms.  Big Bird is an exotic dancer, The Count is a junkie, counting pills, and Cookie Monster is a homeless guy under a blue tarp with a hand-lettered cardboard sign declaring, “Need money for cookies.”  We watch Elmo complain of racial profiling as she’s arrested.

A scowling Harbour stalks through all of it as a dark, minor-key orchestral take on the Sesame Street theme plays.

“If everyone calls you trash and everyone treats you like trash, why don’t ya just become trash?” Harbour growls, as he applies green paint and bushy eyebrows to his face and climbs into a trash can.

As of Monday morning, the Grouch parody was the #4 trending video on YouTube, with well over 2.3 million views and climbing.

Latinos in sports are drawing on their heritage to inspire others
Police searching ‘vast’ preserve for Brian Laundrie, boyfriend of missing 22-year-old Gabby Petito
Hostess assaulted at NYC restaurant after asking Texas patrons for proof of COVID-19 vaccination
‘We are prepared’: Law enforcement stresses readiness ahead of right-wing rally
McAuliffe, Youngkin spar over vision for commonwealth in first Va. gubernatorial debate
‘Law & Order: SVU’ co-star Denmore Barnes on his “surprise” exit: “I don’t totally know why this happened”