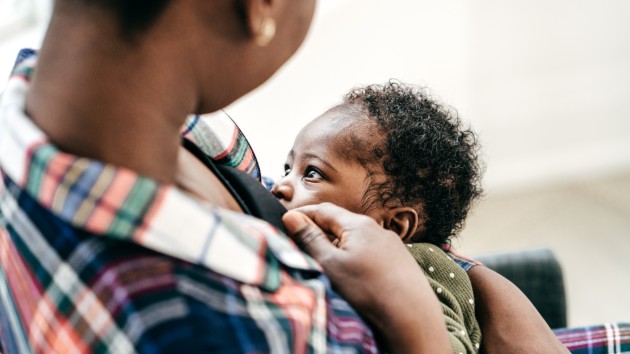 (NEW YORK) — Breastfeeding is not only good for mothers and their babies, but it also protects the environment according to an editorial in the British Medical Journal.”It benefits all of society,” Natalie Shenker, Ph.D., a research fellow at Imperial College, who was involved with the study, told ABC News. “Breastfeeding does not require the energy needed to make and use formula. It doesn’t create waste or air pollution,” said Dr. Laura Teisch, a pediatrician from Las Vegas.Formula produces significant waste during its production, distribution and use.

“As with all products, infant formula has an environmental footprint,” says Andrea Riepe, a representative for Reckitt Benckiser Group which has infant formula Enfamil in its product portfolio. The company works to minimize the waste associated with Enfamil, she added.It’s known that breastfeeding protects both women and children. However, recent studies have highlighted that breastfeeding is also good for the Earth. Supporting mothers to breastfeed more would reduce the same amount of carbon emissions as removing nearly 77,500 cars from the United Kingdom’s roads each year, asserts the editorial’s authors.Over 80% of U.S. children are breastfed at some point but only about 25% are exclusively breastfed until age 6 months, according to the latest National Immunization Survey by the Centers for Disease Control and Prevention.

Why should a woman breastfeed?The American Academy of Pediatrics supports breastfeeding given its benefits to the child. It also helps prevent infection, diabetes, cancer and childhood obesity.“Decreasing the risk for obesity is really important. Obesity is a risk factor for cancers such as breast, uterine, kidney and pancreatic,” said Dr. Vivek N. Patel, a radiation oncologist from Ft. Lauderdale, Florida.There are benefits to the mother as well including decreased bleeding after delivery and a reduced risk of breast and ovarian cancers, the AAP also notes.“Breast cancer is linked to exposure to estrogen,” said Patel. “When a woman breastfeeds, their menstrual cycle is delayed and therefore less estrogen is released.”

Why do some parents choose formula?“Sometimes breastfeeding is contraindicated due to a medical condition,” said Teisch.

For example, “Breastfeeding during cancer treatment isn’t recommended as the treatment can affect your milk supply and harm the baby. If treatment is completed, a woman may breastfeed but the quantity and quality of breast milk may be affected,” said Patel.Breastfeeding is also contraindicated when mothers have HIV and when infants have certain metabolic disorders.Some may prefer formula for the convenience.Formula may also supplement breast milk. Breastfed babies with significant weight loss who also received supplemental formula, had a reduced risk of hospitalization, a recent study in the American Journal of Pediatrics revealed.

Breastfeeding isn’t always an option.“Women who try to breastfeed but are unable to do so are commonly left with ‘mom guilt.’ On top of those internal struggles, these mothers are often ‘formula-shamed’ by family, friends and even medical professionals. Parenting is hard, breastfeeding is hard and life itself can be hard,” said Teisch.The push for “breast is best” feeding often adds pressure on women, agreed Shenker.”I know the struggle women face when they aren’t able to breastfeed firsthand. I, too, had to rely on formula after the birth of my son. He had an extended stay in the NICU and despite my best efforts and support from family and medical professionals, I wasn’t able to produce enough milk,” Teisch shared.”I don’t formula-shame in my own practice. I encourage breastfeeding to the mothers of my patients and inform these mothers of the benefits associated with breastfeeding, but I also recognize and acknowledge to all my families that a healthy, growing and thriving baby with a happy mother is just as important too. Bottom line, fed is best,” said Teisch.

What can we do to support breastfeeding, when possible?There are multiple ways to support breastfeeding mothers, Shenker said. She believes that healthcare providers should be better educated on how to support mothers when they want to breastfeed. Parents should develop a birth plan and a feeding plan, she also advised.Better access to milk banks for children who need supplementation would also help, said Shenker. In fact, Shenker founded the Human Milk Foundation which works to create awareness about, supply and raise funding for donor milk. Shenker hopes her research will shed light on the environmental impact of formula to encourage the government to step up efforts that support breastfeeding.

Why is this important now?Breast health is always important but it’s even more in focus currently as October is Breast Cancer Awareness Month.“Breast cancer awareness is crucial. There have been so many advances in our ability to detect and treat breast cancer in the past decade. As with any medical diagnosis, knowledge is power.” says Patel. Copyright © 2019, ABC Audio. All rights reserved.