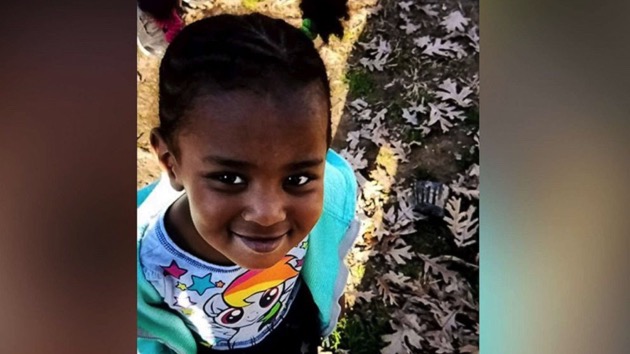 (GREENSBORO, N.C.) — An Amber Alert has been issued for a 3-year-old girl who was reported abducted in North Carolina Wednesday, allegedly taken by a woman in her 20s, authorities said.Ahlora Ashanti Sample Lindiment was reported abducted at 6:33 p.m. Wednesday from the Phillips Avenue area in Greensboro, the Greensboro Police Department said.The 3-year-old was taken from a playground, reported ABC Raleigh station WTVD.”We are still in the process of developing information on the possible abductor and will be updating information throughout the day,” Greensboro Police spokesman Ronald Glenn told ABC News Thursday morning. “We have had resources working throughout the night continuing to gather information.”Ahlora’s mother, Erica Lindiment, is pleading with the public to help.”Even if you don’t want to be known, or you don’t want to have your name or anything to do with it, you can always leave an anonymous tip,” she told WTVD. “Help us find her and make sure she gets home safe.”Ahlora was last seen wearing a short sleeve pink T-shirt, black jeans and possibly white sandals, said police.The suspect is described as a black woman in her 20s who stands at 5 feet 6 inches tall and weighs about 135 pounds, said police. Her hair was in a short ponytail and she was wearing a short-sleeve black crop top with black pants with tiger print faces on them.

Police later said they were looking to identify this woman seen on surveillance video near the scene. While she matches the description given earlier, police spokesman Ronald Glenn said they are “not calling her a suspect, but we believe she may have information about the incident. We want to identify and speak with her about any information or insight she may have.”