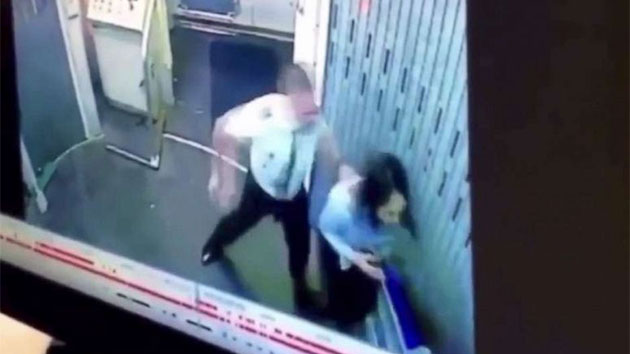 via FlyerTalk
Posted on October 8, 2019 by ABC News

The disturbing video opens with a male pilot walking up to a female co-worker and appearing to spit on her. She responds by slapping him in the face, and the pilot begins to punch her in the stomach and face multiple times.

The employees have since been terminated, according to the airline.

The security footage, obtained by the website FlyerTalk, is now at the center of a police investigation.

The violent incident took place during a layover on Sept. 14, according to the Denver Police Department.

A spokesperson for Republic Airways told ABC News on Tuesday that there were no passengers on the aircraft at the time.

“We are aware of a situation that occurred last month involving two of our employees,” the spokesperson said. “We investigated this matter and took appropriate action consistent with our belief that such behavior is unacceptable.”

The employees — identified as William Thomas, 36, and Marisha Sporer, 29 — were arrested and charged with assault and disturbing the peace, which are municipal offenses.

The two had been involved in an intimate relationship since November, according to a probable cause statement, but things went sour when Sporer saw something she didn’t like on Thomas’ cellphone.

“They both agreed to break up so Thomas went onto the plane and sat in the cock-pit and Sporer went to the gate,” according to a probable cause affidavit. “Sporer became angry and went onto the plane to confront Thomas. Sporer grabbed Thomas by the neck tie and slapped him in the face with an open hand three times. Thomas retaliated by grabbing Sporer and striking her in the ribs with a closed fist.”

They are both scheduled to appear in court next week.