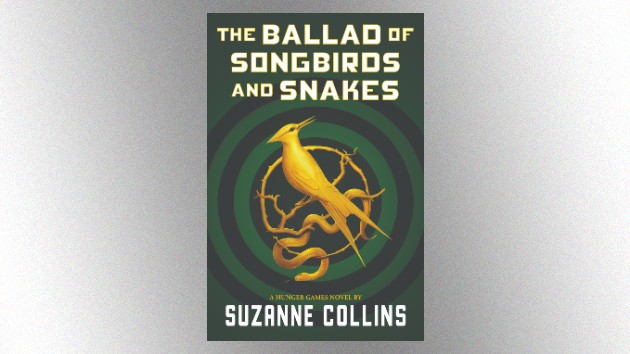 (NEW YORK) — The prequel to the best-selling Hunger Games trilogy has a title and a cover image.

The book by Suzanne Collins is called The Ballad of Songbirds and Snakes. The cover features an image of a mockingjay perched on branch, with a snake slithering in the background. It’s due out May 19, 2020.

As previously reported, the book is set in the country Panem, just like the original series, but it takes place 64 years earlier, on the morning of the reaping of the 10th Hunger Games, when the tributes are chosen

In a statement, Collins said, “With this book, I wanted to explore the state of nature, who we are, and what we perceive is required for our survival. The reconstruction period ten years after the war, commonly referred to as the Dark Days — as the country of Panem struggles back to its feet — provides fertile ground for characters to grapple with these questions and thereby define their views of humanity.”The Hunger Games books debuted in 2008. More than 100 million copies of the trilogy — The Hunger Games, Catching Fire and Mockingjay — have been sold.

The four Hunger Games movies, starring Jennifer Lawrence as the bow-and-arrow wielding freedom fighter Katniss Everdeen, have grossed about three billion dollars at the box office.There is speculation that the prequel may become a movie as well.

Democrats lash out at Biden administration over handling of Haitian migrants
Mom dying of ovarian cancer shares what she wants women to know about the deadly disease
First ‘SNL’ guests of the season: Owen Wilson, Kim Kardashian West, Rami Malek, and Jason Sudeikis
“No one is safe. Not one of you.”: Johnny Depp decries ‘cancel culture’
Ray J responds to rumors of a second sex tape with Kim Kardashian: “This ain’t cool”
Tonight on ABC: ‘The Wonder Years’