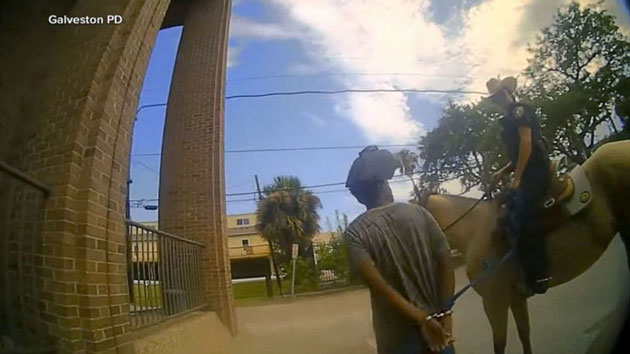 (GALVESTON, Texas) — The body camera footage of a pair of white police officers on horseback walking a handcuffed black man by rope through the streets of a Texas town, has been released.The Aug. 3 arrest of Donald Neely prompted immediate outcry when photos of the incident first circulated, and now there is renewed interest in the case after the city of Galveston’s release of the video.The footage recorded the officers handcuffing Neely, who was arrested on charges of criminal trespassing, and holding the rope that was tied to those handcuffs.The officers can be heard acknowledging the optics of the scene.”This is going to look so bad. I’m glad you’re not embarrassed Mr. Neely,” one of the officers is heard saying.One officer is heard asking the other if they “want to make him walk all the way back.” They proceeded to take him through the town while he was walking between the two officers on horseback for about a half hour.At one point, one of the officers warns Neely to keep close.”Stay next to me because I’m going to drag you if not. You have to stay next to me,” the officer is heard saying.Galveston Police Chief Vernon L. Hale III issued an apology in the aftermath of the arrest on behalf of the department, saying the officers “showed poor judgment.”Neely’s attorney held a news conference days after the incident, before the video was released, pointing to racial undertones of the scene.”These horrific images … conjure up historical memories of when slave owners … dragged black slaves by rope around their necks back in the 1700s and the 1800s,” attorney Benjamin Crump said. “This isn’t 1819, this is 2019, Galveston!”The video was held until an administrative review of the two police officer’s actions was complete.”I appreciate the efforts of Sheriff Henry Trochesset and thank the Galveston County Sheriff’s Office for taking the time to perform a thorough, independent review of the arrest,” Chief Hale said in a statement released along with the videos. “I am studying the report now and will use its findings to make decisions in the near future about the next steps for the department.”