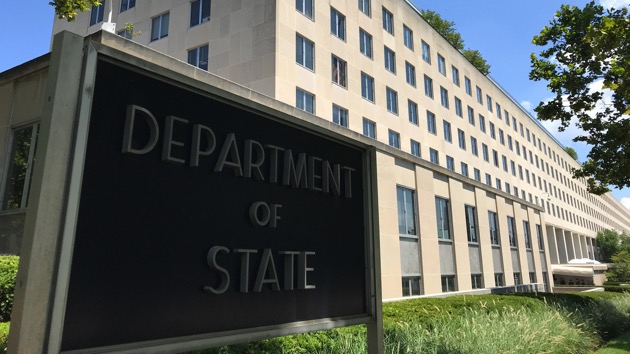 (WASHINGTON) — Secretary of State Mike Pompeo on Tuesday accused the Democratic chairs of three House committees investigating the State Department’s role in Rudy Giuliani’s efforts in Ukraine of trying to “intimidate, bully, and treat improperly” five State Department officials called for depositions. Hours later, Reps. Eliot Engel, D-N.Y., Adam Schiff, D-Calif., and Elijah Cummings, D-Md, blasted back, arguing Pompeo was the one trying “to intimidate witnesses or prevent them from talking with Congress,” accusing him of obstructing the House’s impeachment inquiry. Referring to news that Pompeo was on President Donald Trump’s phone call with the Ukrainian president, the three chairs called Pompeo a “fact witness in the House impeachment inquiry.”Despite Pompeo’s objection, at least two of the five officials will sit for depositions, including Kurt Volker, the special envoy for Ukraine who helped connect Giuliani with Ukrainian officials and submitted his resignation last Friday.In the letter, released on Twitter and addressed to Engel, the House Foreign Affairs Committee chairman, Pompeo blasted the depositions in the impeachment probe as rushed and potentially in violation of executive privilege, accused committee staff of not following protocol, and appeared to say the officials will not show up.”Based on the profound procedural and legal deficiencies noted above, the Committee’s request dates for depositions are not feasible,” Pompeo concluded his letter.

I’m concerned with aspects of the Committee’s request that can be understood only as an attempt to intimidate, bully, & treat improperly the distinguished professionals of the Department of State, including several career FSOs. pic.twitter.com/QRtMaXlhQM

Late Tuesday, Engel, Cummings and Schiff — chairs of the House Foreign Affairs, Oversight and Intelligence committees, respectively — responded to Pompeo’s letter from earlier that day with one of their own — but addressed to Pompeo’s No. 2, Deputy Secretary of State John Sullivan.The chairs wrote that they “may infer that [Pompeo] is trying to cover up illicit activity and misconduct, including by the President. This would be a blatant cover-up and a clear abuse of power.”They added: “Secretary Pompeo now appears to have an obvious conflict of interest. … He should not be making any decisions regarding witness testimony or document production in order to protect himself or the President.”The congressmen again accused Pompeo of intimidation and obstruction, but added the threat could be “punishable by fine or up to five years in prison.”Five State Department officials have been scheduled for depositions, according to the letter from House Democratic chairs Friday: Former U.S. Ambassador to Ukraine Marie Yovanovitch, Deputy Assistant Secretary for Europe George Kent, State Department Counselor Ulrich Brechbuhl, U.S. Ambassador to the European Union Gordon Sondland, and Volker.Pompeo made it seem that none of the officials would appear for their scheduled depositions: “The committee has not issued any subpoenas for depositions, and we are not aware of any other authority by which the committee to could compel appearance at a deposition.”He says there has been no official notice of a deposition and the department has not been given enough time to prepare the officials — some of whom have sought personal attorneys, he says, while others need more time to do so. Even after they do so, the officials and their attorneys need to meet State Department lawyers because the department has “legitimate interests in safeguarding potentially privileged and classified information,” according to Pompeo.”This information may also remain subject to federal rules relating to the unauthorized disclosure of classified information,” Pompeo added, saying lawyers from the executive branch would have to be present for the depositions, too.Hours later, however, a House Intelligence committee official confirmed to ABC News that Volker, who no longer works for the department, has told Congress he will still appear Thursday. Yovanovitch, who was scheduled for a deposition on Wednesday, will now be appearing on Oct. 11 at the agreement of both the committees and her counsel, according to the official.Pompeo’s letter prompted strong push back from the three chairmen, who accused him of intimidating the State Department officials he says he is defending — which “is illegal and will constitute evidence of obstruction of the impeachment inquiry. In response, Congress may infer from this obstruction that any withheld documents and testimony would reveal information that corroborates the whistleblower complaint,” they said in a joint statement.House Democrats have pushed for an expeditious investigation into President Donald Trump and Giuliani’s push to have Ukraine’s new president, Volodymyr Zelenskiy, investigate former Vice President and Democratic presidential candidate Joe Biden and his son Hunter.The State Department has increasingly been drawn into the controversy after news that Pompeo was part of the July 25 call between Trump and Zelenskiy where he pressed the new president to cooperate with Giuliani and Attorney General William Barr on an investigation. Senior officials like Volker and Sondland also assisted Giuliani in contacting the Zelenskiy administration, with the department confirming in August that Volker contacted Giuliani to put him in touch with Zelenskiy’s advisers at their request.Pompeo himself was also subpoenaed by the three committees to produce documents related to the controversy. In his letter, he does not say whether he will comply, just that the department “intends to respond to that subpoena by the noticed return date” this Friday.While the House Democratic chairmen have warned that not appearing at these depositions or failing to comply with the subpoenas would be “evidence of obstruction,” Pompeo blasted that, writing, “There is no legal basis for such a threat… I urge you to exercise restraint in making such unfounded statements in the future.”He also accused Engel’s committee’s staff of trying to “intimidate” the five officials by reaching out to them directly, rather than through channels with the department: “I will not tolerate such tactics, and I will use all means at my disposal to prevent and expose any attempts to intimidate the dedicated professionals whom I am proud to lead and serve alongside at the Department of State.”In Italy Tuesday, in a photo-op with the country’s prime minister, Pompeo ignored a reporter’s question about whether he was on the Ukraine call. Copyright © 2019, ABC Audio. All rights reserved.