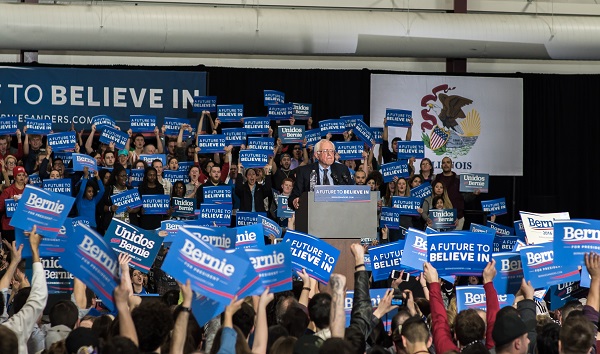 (NEW YORK) — Presidential candidate Sen. Bernie Sanders, I-Vt., had emergency heart surgery after experiencing chest pain on the campaign trail Tuesday, his campaign said Wednesday.Sanders, who is 78, had two heart stents put in after doctors discovered a blockage in his artery.“Sen. Sanders is conversing and in good spirits,” senior campaign advisor Jeff Weaver said in a statement. “He will be resting up over the next few days. We are canceling his events and appearances until further notice, and we will continue to provide appropriate updates.”Heart stents hold the artery open and allow blood to flow through a previously blocked area. While an artery blockage might seem like code for a heart attack, that’s not necessarily the case, health experts say.While a full blockage can sometimes lead to a heart attack, in less severe cases, a blockage can manifest as chest pain or shortness of breath. Instead, an artery blockage is generally another term for coronary heart disease, which usually develops over decades, according to the Mayo Clinic. Cardiovascular disease is the leading cause of death in the United States, according to the American Heart Association.Since heart disease risk increases with age, Sanders “is in the right age bracket,” said Dr. Jennifer Haythe, a cardiologist at New York-Presbyterian/Columbia University Irving Medical Center, who is not connected to Sanders’ care.”The prognosis with prompt re-vascularization is excellent, as long as there is no long-term damage to the heart,” Haythe explained. “We would expect him to be fine.””This is a commonly done procedure,” echoed Dr. Mustafa Ahmed, associate professor in cardiovascular disease at the University of Alabama at Birmingham. Ahmed, who is not involved in Sanders’ care, noted that patients are typically directed to take a blood thinning medication for the rest of their lives, following a stent insertion.Although Sanders’ age has been a talking point following his hospitalization, “generally speaking, age doesn’t really affect the recovery a lot,” said Dr. Craig A. Thompson, director of interventional cardiology and cardiac catheterization at NYU Langone Health.”An otherwise healthy 78-year-old can recover as fast or more quickly than a man or woman in their 60s, who has other illnesses,” explained Thompson, who has performed many stent insertions and is unconnected to Sanders’ care. Most patients without major issues, such as a full-blown heart attack, go home within 24 hours, according to Thompson.”I would expect that he’s back at it,” Thompson said of Sanders.In 2016, Sanders’ long-time physician released a doctor’s note on his medical history, noting that the senator weighed 179 pounds at his most recent physical and was in “very good health.”Copyright © 2019, ABC Radio. All rights reserved.

FDA authorizes J&J vaccine, giving US a 3rd option to fight COVID-19 virus. Here’s what’s next.
The Terminator is back…in animated form for Netflix
Andra Day and Lee Daniels discuss their “wonderfully collaborative” process making ‘The U.S. vs Billie Holiday’
One Medical vaccine supply cut off in five counties after ineligible patients skipped the line
J&J vaccine is up for review: Here’s what happens next
What is COVAX? How a global initiative is helping get COVID-19 vaccines to poorer countries