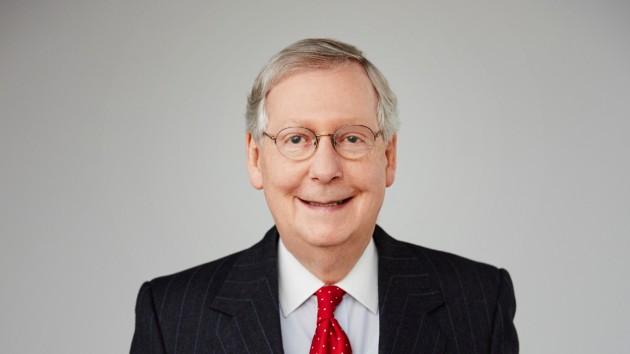 (WASHINGTON) — Senate Majority Leader Mitch McConnell said on Monday the Senate would have “no choice” but to also take up articles of impeachment if the House were to vote in favor of the move against President Donald Trump. “The Senate impeachment rules are very clear,” McConnell, a Kentucky Republican, said in an interview with CNBC. “The Senate would have to take up an impeachment resolution if it came over from the House.””Under the Senate rules we are required to take it up,” McConnell reiterated in the interview. “If the House goes down that path, we will follow the Senate rules.”His statement puts to rest any speculation that McConnell would ignore the House if it passed articles of impeachment against the president.McConnell also added that he would likely not have the 67 votes he would need to change the Senate rules related to impeachment.”It is a Senate rule related to impeachment that would take 67 votes to change. I would have no choice but to take it up,” he said. “How long you’re on it is a whole different matter, but I would have no choice but to take it up, based on a Senate rule on impeachment.”In a historic move last week, House Speaker Nancy Pelosi announced that House Democrats were moving forward with an official impeachment inquiry into Trump.”The actions of the Trump presidency revealed the dishonorable fact of the president’s betrayal of his oath of office, betrayal of our national security and betrayal of the integrity of our elections,” Pelosi said. “Therefore, today I’m announcing the House of Representatives is moving forward with an official impeachment inquiry.””The actions taken to date by the president have seriously violated the Constitution,” Pelosi said. “The president must be held accountable.”Pelosi likely has the votes to impeach Trump, but two-thirds of the Senate is needed to convict and remove Trump from office. As it stands now, with Republicans in control of the Senate, that is not likely to happen.The fast-moving developments came amid new questions about whether Trump had made millions in military aid to Ukraine contingent on President Volodymyr Zelenskiy agreeing to investigate former Vice President Joe Biden and his son, Hunter.Trump, who said previously he was concerned about sending aid to Ukraine because of his allegations of corruption, gave a new explanation last Tuesday, saying he had ordered the aid frozen — before the call — because he was unhappy with how much European countries were contributing to Ukraine.He has always said there was nothing wrong with the call he made to Zelenskiy.In her formal announcement last Tuesday afternoon, Pelosi said the Trump administration blocking the whistleblower complaint from being sent to Congress was a “violation of the law” and said Trump calling on a foreign leader to interfere in a U.S. election was “a breach of his constitutional responsibilities.”The intelligence community’s inspector general found that the whistleblower’s complaint was “credible” and of “urgent concern.” That complaint was released to the public last Thursday, ahead of acting Director of National Intelligence Joseph Maguire’s testimony before the House Intelligence Committee on his handling of the complaint. Copyright © 2019, ABC Audio. All rights reserved.