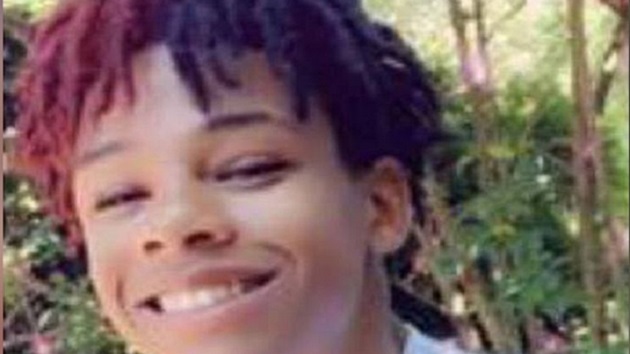 (OCEANSIDE, N.Y.) — Family and friends of Khaseen Morris, the 16-year-old whose stabbing death was broadcast over Snapchat, gathered Saturday at the Tower Funeral Home in Oceanside, New York, to remember the late teen.Meanwhile, prosecutors announced that seven suspects have been charged with gang assault in connection to Morris’ death. An eighth man has already been charged with murder. Morris was in the parking lot of a strip mall on Sept. 16 when he was fatally stabbed, reportedly over a girl, as dozens of onlookers watched and no one tried to intervene. Even more people viewed the brutal killing on the social media app. Morris was taken from the scene to the hospital, where he was pronounced dead.”You could see him like, in so much pain, and he couldn’t breathe, and he just fell, and no one helped him,” Keyanna Morris, Khaseen Morris’ sister, told ABC7 New York.Morris’ sister described him as a “sweetheart” who would help anyone, according to ABC7. He was a senior at Oceanside High School and a vigil was held for him in the parking lot where he was attacked last week.Nassau Police Commissioner Patrick Ryder announced Saturday the arrests of Haakim Mechan, 19, Marquis Stephens Jr., 18, Javonte Neals, 18, Taj Woodruff, 17, Sean Merritt, 17, and two 16-year-old male juveniles in connection to Morris’ death. All of the suspects are from Long Beach, New York and have been charged with gang assault.Ryder clarified that these seven suspects are not part of a gang, “there is no gang issue in Oceanside,” but that the charges of gang assault are levied when three or more people physically harm someone.Det. Lt. Stephen Fitzpatrick said all seven charged with gang assault had an “active” role in the attack on Morris. “The seven subjects were active participants in the attack on Khaseen Morris and his friend,” he said Saturday during a press conference. “Physically beating, physically hitting people, throwing them to the ground, each one of them had an active role.”The adult suspects charged in Khaseen’s stabbing death were escorted Saturday morning by police to their arraignment.Police previously charged 18-year-old Tyler Flach, of Lido Beach, with murder, and allege that he reportedly stabbed Morris in the chest. Flach pleaded not guilty and is being held without bail.Nassau County District Attorney Madeline Singas said at Saturday’s press conference that the case will now head to a grand jury, which can add or change charges as the investigation continues.“There are seven more people who will be accountable for this most violent and atrocious attack that led to the murder here in Oceanside,” Singas said during the press conference.Authorities said they are still asking for additional witnesses to come forward because they believe there was more video taken of the attack that they have not viewed.“We can’t be everywhere at all times. The only way that we can receive justice is if the community helps us and cooperates,” Singas said. “It’s imperative we get this information that we can seek justice for Khaseen’s family and for the Oceanside community.” Copyright © 2019, ABC Audio. All rights reserved.