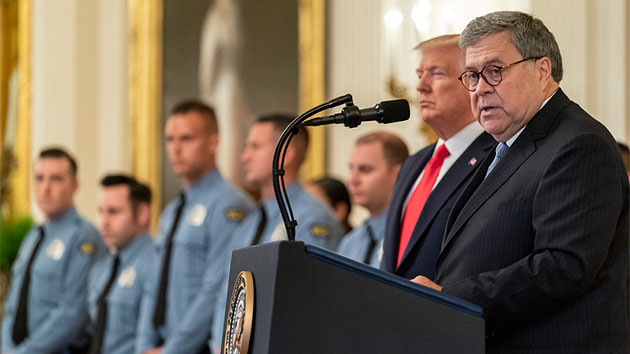 (WASHINGTON) — House Speaker Nancy Pelosi said Friday that Attorney General William Barr had gone “rogue” because of the way he and the Justice Department handled the whistleblower complaint centered on President Donald Trump’s call with Ukraine’s president in which he repeatedly urged him to investigate Joe Biden and his son.

Trump suggested that Barr could aid in the investigation.

After first making the comment on MSNBC’s ‘Morning Joe,” Pelosi repeated it to CNN.

“I do think the attorney general has gone rogue, he has for a long time now. Since he was mentioned in all of this, it’s curious about how he would be making decisions about how the complaint would be handled,” she told CNN.

“If by “going rogue” Speaker Pelosi means that the Department of Justice follows the law and [long]-established procedures, she is correct,” DOJ Spokeswoman Kerri Kupec said in a statement Friday evening.

The Justice Department has denied that Barr and Trump ever spoke about the Ukraine matter, but Democrats expressed fury over Trump’s comments, which suggested the president was prepared to try to task the country’s lead law enforcement official with pushing forward an investigation into his political opponent.

“What adds another layer of depravity to this conversation is that the President of the United States then invokes the Attorney General of the United States as well as his personal lawyer as emissaries,” House Intelligence Chairman Adam Schiff, D-Calif., said Wednesday. “In the case of the attorney general, as the official head of the U.S. Department — the Department of Justice, that will be part and parcel in this.”

The Justice Department revealed Wednesday that the whistleblower complaint sparked a referral to the DOJ’s criminal division about whether Trump potentially violated campaign finance law. However, the criminal division, after reviewing the matter, determined there was no campaign finance violation and “has concluded the matter,” Kupec said Wednesday.

This isn’t the first time, Barr and Pelosi have been on each other’s radar.

The attorney general of the United States did not tell the truth to the Congress. That’s a crime,” Pelosi said in May, about Barr’s testimony on the Mueller report..

The House voted to hold Barr in contempt and some Democrats suggested he even be locked up in a jail cell underneath the Capitol used decades ago, although it’s not clear it still exists.

Not long after, at the 38th Annual National Peace Officers Memorial Service on Capitol Hill, Barr, approached Pelosi, shook her hand, and said loudly, “Madam Speaker, did you bring your handcuffs?” according to a source who witnessed the conversation.

Pelosi smiled and quickly threw some shade back at Barr, indicating that “the House Sergeant at Arms was present at the ceremony should an arrest be necessary,” according to a source who observed the exchange.

Barr chuckled and walked away, according to the bystander.