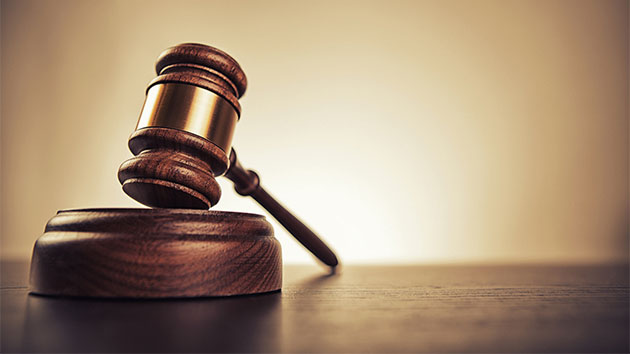 (NEW YORK) — A heartbroken mother pleaded for a New York City judge on Friday to give leniency to her Ivy League educated son, who was convicted for the execution-style murder of her husband.

“My husband would still be alive today if we got him to a psychiatric hospital 15 years ago,” Shelley Gilbert read, her voice cracking as Gilbert Jr. glanced at her over his right shoulder.

The 34-year-old Princeton University graduate was found guilty in June for killing his 70-year-old father, Thomas Gilbert Sr., on Jan. 4, 2015. Gilbert Sr., the founder of Wainscott Capital Partners, was found with a gunshot wound to the head inside the bedroom of his Beekman Place apartment.

“I wish you and everyone here could know my son before he was struck with schizophrenia,” said Shelley Gilbert, trying to fight back tears.

The gruesome scene came hours after the financier threatened to stop giving Gilbert Jr. a monthly allowance between $300 and $1000 and paying rent for his studio apartment. Prosecutors said Gilbert Jr. tried to throw off investigators by staging his father’s death as a suicide, but a search warrant of his W. 18th Street apartment uncovered the murder weapon — a .40-caliber Glock.

“I ask you, judge, to put him in a psychiatric hospital somewhere close to home so we can visit him,” said Shelley Gilbert, who was married to her husband for 30 years before the murder. “I knew if my husband can speak from heaven, he would say this is wrong. This is exactly what my husband would have wanted.”

According to Gilbert Jr.’s attorney, Arnold Levine, the then-30-year-old suffers from a slew of mental illnesses, but the jury did not buy the mental-defect defense. Levine requested that the judge give him the minimum sentence of 15 years to life.

“He may have psychiatric problems, and I support mental health treatment through the Department of Corrections, but he was a functioning adult when he murdered his father,” said Assistant District Attorney Craig Ortner. “Rather than a psychotic break, he thought of this for some time … he searched for a hit man on the internet.”

“You planned to kill your father, you had a rouse set up to get your mother out of the house, you knew exactly what you were doing you were not insane then and you’re not insane now,” Jackson said to Gilbert Jr.

The jury had deliberated for two days before convicting Gilbert Jr. of second-degree murder and two counts of criminal possession of a weapon.

Two of the jurors told ABC News after the deliberations in June that an errand Thomas Jr. sent his mother on was the key to reaching a guilty conclusion.

“At first I believed he wasn’t responsible because of his mental illness, but after reading through all the manuscripts it hit me: that one line about the Coke showed that he was conscious of his actions at the time,” said Kimmy Lee, 61.

When Gilbert Jr. was given the opportunity to speak to address the court, he rambled for about 10 minutes while looking at handwritten notes littered with legal statutes and referred to himself as “the defendant.”