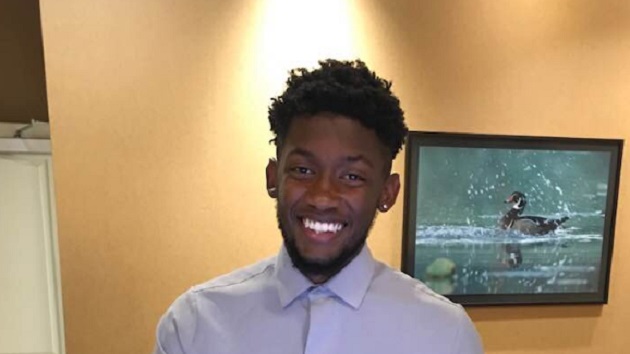 (BEAUMONT, Texas) — A Texas hotel employee is being hailed as a hero after working 32 hours straight and helped to ensure guests’ safety and comfort as the region was assailed by Hurricane Imelda.Satchel Smith began his shift at the Homewood Suites in Beaumont at 3 p.m. on Sept. 18 but was not relieved until 9:30 p.m. on Sept. 20, reports ABC affiliate WFAA. At one point, he was the lone employee on-site, said hotel guest Angela Chandler in a Facebook post praising Smith. His co-workers were unable to travel in the storm to get to work at the Hilton-owned hotel.”Meet Satchel. He is the only employee here at Homewood Suites in Beaumont. The access road is underwater and [Interstate 10] is shut down due to flooding. We can’t get in or go out. The hotel a mile from us is under water. Satchel has been here all night,” Chandler wrote. She said in her Facebook post that she was a guest at the hotel during Smith’s long hours.She went on to commend Smith, a full-time college student at Lamar University, for his service. “He has manned the phones, answered each of our questions, ensured that we have had a hot cup of coffee or tea, and helped serve us a hot breakfast,” she posted. She wrote that he “handled this situation with grace, kindness, and a beautiful smile on his face.”During Smith’s shift the weather caused problems with the hotel’s computers, setting off fire alarms, yet the young worker tried to remain calm, Smith told WFAA. He and guests of the hotel worked together making breakfast and dinner for everyone.However, Smith said that he doesn’t consider himself a hero.”I was always gonna be there for them, I would never plan on leaving,” he said. “I don’t consider myself a hero, that’s just what I would do, I think anybody would do the same thing.”Hurricane Imelda paralyzed the Houston, Texas, area, bringing hazardous flooding that so far, has left five dead and a wake of destruction in its aftermath. Many in the area are still recovering from Hurricane Harvey, which struck two years ago.Texas Gov. Greg Abbott on Thursday declared a state of disaster for 13 counties as the floodwaters climbed. In Harris County, which encompasses Houston, more than 1,000 people were rescued.The downpour is the fourth highest amount of rain from a tropical system in Texas’ recorded history, as well as the seventh highest amount of rain from a tropical system in U.S. recorded history. Copyright © 2019, ABC Radio. All rights reserved.