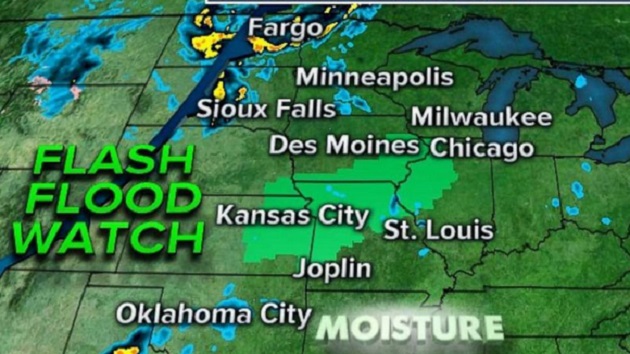 (KANSAS CITY) — Flash flooding and severe storms are possible across the Central United States today, as a strong cold front sweeps across much of the region. Moisture that was once associated with the remnants of Imelda will interact with a strong cold front developing across the Central U.S. this weekend. Storms are already moving through parts of the Northern Plains, and will continue to move eastward through the day.There have been numerous reports of large hail, some the size of baseballs, in parts of the Dakotas overnight. Additionally, there have been reports of flash flooding near Bismarck and Grand Forks, North Dakota, and there has been a preliminary report of at least 8 inches of rain near Sheridan and Burleigh counties in North Dakota.A flash flood watch has been issued from Eastern Kansas to Western Illinois, including the Kansas City area. This is due to the threat of significant flooding this weekend from storms that move through the region.Later on Saturday, numerous strong storms will develop across the Central U.S. and move into parts of the Northern and Central Plains, with some storms even getting into parts of Chicago and Milwaukee. There is a slight risk of severe weather in parts of Northern Minnesota Saturday afternoon, including the risk of strong winds and brief tornadoes.The action will then fire up further south in parts of the Southern and Central Plains, and across parts of Oklahoma, Kansas, Missouri and Iowa. Trailing thunderstorms are likely to bring heavy rainfall, with rates approaching 2″ per hour, which could cause dangerous flash flooding at night.Additionally, there is a slight risk of severe weather from Wichita to Des Moines. including the possibility of damaging winds, large hail, and brief tornadoes.Then on Sunday night, storms will fire along the cold front as it moves eastward with numerous strong storms, perhaps with locally heavy downpours from Arkansas to Michigan including Paducah and Indianapolis. Localized flash flooding will be possible.In the Atlantic basin, Jerry has transitioned to a tropical storm this morning with 65 mph winds. The storm is moving northwestward over the Western Atlantic and will still bring heavy rainfall to parts of the Northern Leeward Islands and Puerto Rico. On the forecast track, it remains possible that Jerry will be near Bermuda later in the coming week, but it remains to early to determine what, if any, impact the storm will have on the Island nation.Meanwhile in the rest of the Caribbean, two different tropical waves are being monitored. A tropical wave east of the Windward Islands will begin to move westward this weekend and possibly become a tropical depression later this weekend. A Hurricane Hunter Aircraft will investigate this tropical wave later on Saturday. Currently there is a medium chance of development over the next 2-5 days.There is also a disorganized tropical wave located in the Western Caribbean near Haiti. This system only has a low chance of development over the next 5 days. Regardless of the development of these two tropical waves, heavy rainfall is expected over parts of the Lesser Antilles, Puerto Rico, Hispanola, Jamaica and Cuba. Tropical rainfall could cause flash flooding and mudslides in some of these Caribbean Islands.Lastly, a new tropical wave is moving off the western coast of the African continent this weekend. Environmental conditions look favorable for development immediately as the system moves into the warm Atlantic water. As a result, a tropical depression or storm is likely to form early in the upcoming week.In the eastern Pacific, there are three different tropical disturbances that are being tracked. Two of them pose a concern to Mexico and perhaps the Southwest U.S. Hurricane Lorena is currently moving parallel and east of the Baja California peninsula.Mario, located well south of Cabo San Lucas, will move parallel on the western side of the Baja California peninsula.Both of these storms look to fall apart as a distinct entity within the next 2-4 days, and therefore do not pose a true tropical threat to the U.S. However, both storms will push moisture into the Southwest U.S. Some of this moisture will get caught up in the semi-permanent low in Southern California, and a cold front that is stalling out in the desert. The result is an increasing possibility of heavy rainfall in the desert Southwest, including Phoenix and Tucson early next week. Copyright © 2019, ABC Radio. All rights reserved.