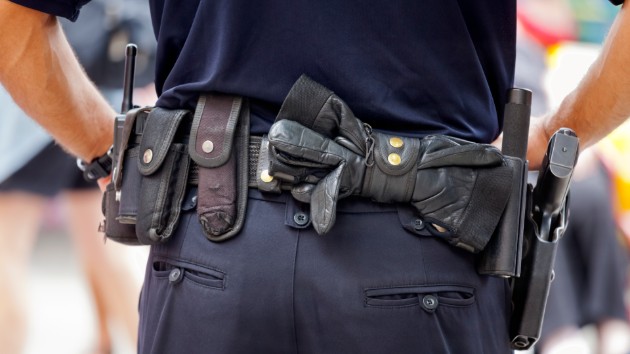 (NEW YORK) — Police agencies across the country are having trouble keeping and hiring police officers, according to a new survey obtained by ABC News.Produced by the Police Executive Research Forum, the survey shows a “triple threat” for police departments: there is a decrease in applications, early exits and higher rates of retirement. Agencies participating in the survey reported that there has been a 63% decrease in applying to become a police officer. Departments are also having trouble hiring non-white/minority applicants the most, followed by female officers, according to the survey.Montgomery County, Maryland, just outside of the nation’s capital, felt the hit because of increased racial profiling incidents, when someone is targeted because of their race of ethnicity, according to acting Police Chief Marcus Jones.”I can’t ignore that that’s a factor. When you do a job that’s being highly criticized on a daily basis, we have to ask ourselves, how do we find good candidates that really want to be under that type of scrutiny,” Jones said, according to Bethesda Magazine. “If you feel like you’re being scrutinized all the time, then this may not be the career that you want, so we understand that that may be a roadblock for us.”More officers are also leaving the profession between one and five years on the job and experienced police officers are retiring at a faster rate than ever before, further depleting the ranks.PERF said that currently 8.5% of officers are eligible for retirement and another 15.5% will become eligible within five years.”This is an issue that keeps police chiefs up at night,” Chuck Wexler, the executive director of PERF, told ABC News.The survey points to the number of challenges that a modern-day police officer might face, and indicates it is a challenge to balance the complexities of incidents, such as cyber crimes or having to administer naloxone to overdosing patients. The survey suggests departments consider an applicant’s temperament when hiring in an effort to hire people who will be able to make policing a career.There have been some proactive approaches to broaden the pool of qualified applicants. For example, “some agencies have relaxed their hiring standards, especially with respect to educational levels, prior drug use, tattoos and facial hair. Some of these changes, such as eliminating prohibitions on most tattoos, reflections of broader changes in societal norms that agencies must adapt to,” the report explains.The survey didn’t include data about what relaxed policies might have done to help fill the ranks, but indicated that of the departments surveyed 62 have relaxed their tattoo policies.Police departments are also urged in the survey to find non-traditional methods to hire more law enforcement officers and offers recommendations to agencies for more effective ways to recruit and retain officers. For example, PERF recommends showing “realistic” videos and materials about what police work involves and highlighted Fayetteville, North Carolina, which presents a service-based message to recruits.Wexler said the survey is important to find out “where agencies are going and how to train for the future.”The survey encompasses agencies from 45 states, the District of Columbia and Canada — with the majority of answers coming from medium-sized departments. Copyright © 2019, ABC Radio. All rights reserved.