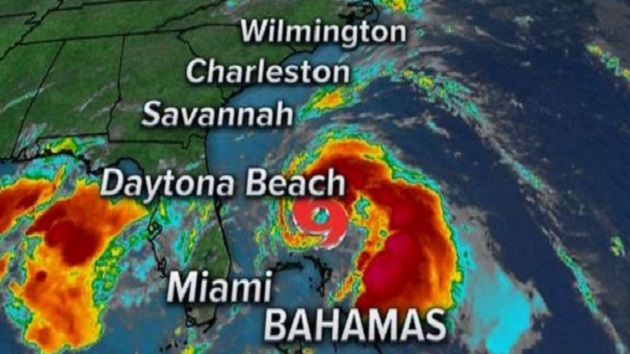 (MIAMI) — Tropical Storm Humberto is expected to strengthen over the next few days, likely becoming a Hurricane by late Sunday night or Early Monday, but is forecasted to make a sharp turn northeastward on Monday and avoid landfall with the United States.Humberto likely will become a Category 2 Hurricane by midweek and should do so in the open Atlantic Ocean. Humberto does seem to be traveling in the direction of Bermuda but it is unclear at this point what, if any, impact the storm will have on Bermuda later this week.Tropical Storm Humberto currently has winds of 60 mph this morning and is about 175 miles east of Cape Canaveral, Florida, moving NNW at 7 mph.Computer models still indicate that Humberto should stay well offshore with only a couple of outer bands perhaps making it to parts of the Southeast coast. As Humberto travels north parallel to the Southeast coast line, a frontal system from the north and west should help steer it away from the US Mainland and move it into the open Atlantic Ocean.Due to the relatively large distance between Humberto and land, impacts from this strengthening storm should be kept to a minimum with only a couple of tropical showers reaching the U.S. coast line as well as rough surf and rip currents.West of Humberto is a cluster of thunderstorms that will drift westward over the next few days and it appears that some tropical rain showers will move to parts of the U.S. coast line in the western Gulf of Mexico beginning Monday and most likely lasting through Wednesday.In the central Atlantic, a cluster of thunderstorms is slowly drifting westward and conditions will become more favorable for development later this week as the system continues to move west. But, as of right now, this cluster of storms looks like it will drift north of the Lesser Antilles.Elsewhere, a couple of brush fires started on Saturday including the Horseshoe fire in Riverside County, CA and, as of 2:30 a.m. EST, the fire had grown to 200 acres and is 10% contained. Los Angeles ABC station KABC is reporting that evacuations were ordered for parts of region due to the fast moving brush fire and that a brush fire along I-15 in Escondido caused closures on the interstate.Fire weather watches and Red Flag Warnings have been issued for parts of California eastward to parts of Wyoming. The National weather Service in Reno, Nevada is calling this an Extreme Red Flag Warning and a particularly dangerous situation as wind gusts could reach as high as 60 mph.In the Los Angeles region, onshore winds will develop and could gust up to 40 mph. Some dry air should linger around the region initially and create a brief period of critical fire weather conditions on Sunday and Monday.In the Midwest, numerous strong storms are bringing heavy rainfall of up to 2 inches per hour in some areas meaning flash flood and flood watches have been posted in parts of the region.This storm system will quickly move off to the southeast and then lose much of its strength. In fact, by the end of the morning, only a couple remnant showers will move across parts of Michigan, Indiana and Ohio. This is also part of the same storm system will help steer Humberto away from the U.S. east coast.Meanwhile behind this system, warm air will quickly move in with temperatures reaching as high 10 to 15 degrees above average in parts of the Midwest — most notably Kansas City where temperatures will be in the 90’s through the beginning of the week. Temperatures could come close to 90 degrees from Philadelphia to Washington, D.C. on Monday.Copyright © 2019, ABC Radio. All rights reserved.