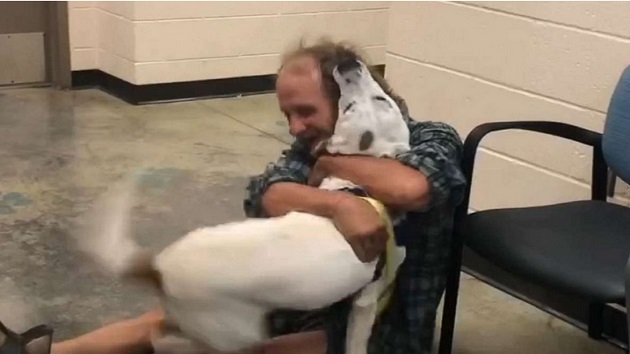 (MEMPHIS, Tenn.) — It had been weeks since Anthony Rogers last saw his beloved dog, Bobo.Rogers, an artist who is currently homeless in the Memphis area, had been on the streets with Bobo before waking up one morning in late August to find that his Staffordshire Terrier mix was no longer there, according to the Memphis Animal Shelter.He immediately contacted friends to help him look for the dog, and put up flyers in the area in case anyone spotted him.On Wednesday, Bobo turned up at the Memphis shelter and an employee recognized him from the missing dog ads, prompting her to immediately call the number on the lost poster.Minutes later, the dog and his owner shared a heartwarming reunion.Video of the reunion shows Bobo running into Rogers’ arms and excitedly jumping up all over him, with his tail wagging wildly.“Bobo could not contain his happiness at seeing his dad again,” the shelter wrote on Facebook.Rogers can be seen smiling ear-to-ear.Bobo has since been neutered, given a microchip and vaccinated by the Utopia Animal Hospital in Memphis.The shelter gave Rogers a year’s supply of dog medicine and a bag of dog food. Bobo will also be rocking some new accessories thanks to the shelter, including a harness, leash, collar and tag, the shelter said.Utopia Animal Hospital will continue to care for the dog as Rogers gets back on his feet, a spokeswoman said.

Police use drone to find blind man who had been missing for 33 hours
Search on for Anitra Gunn, 23, missing in Georgia for days
Former inmates start forestry company after working as firefighters in prison
Experienced skydiver killed in hard landing in Florida
Bee-killing pesticides could be banned in Minnesota under new bill
Search intensifies for man, woman in their 70s missing for days in California