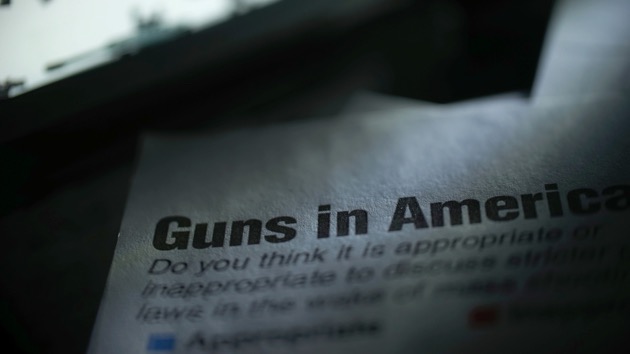 (WASHINGTON) — Federal action on guns has been a divisive issue, but a quarter of a century ago, it was a reality.On this day 25 years ago, then-President Bill Clinton signed the Public Safety and Recreational Firearms Use Protection Act, commonly called the Federal Assault Weapons Ban, which was a part of the Violent Crime Control and Law Enforcement Act of 1994.The ban was law for a decade before expiring in 2004, but the effectiveness of the ban has been debated ever since.Regular mass shootings have kept the topic of a new version of an assault weapons ban in the national conversation in recent years.The 1994 versionMost reviews of the 1994 version of the assault weapons ban point to loopholes in the text of the bill that, some argue, made it less effective than some would have wanted.The bill specifically changed the federal criminal code “to prohibit the manufacture, transfer, or possession of a semiautomatic assault weapon,” however, it specified which semiautomatic assault weapons were included.The bill banned more than a dozen specific firearms and certain features on guns, but because there are so many modifications that can be made on weapons and the fact that it did not outright ban all semiautomatic weapons, many such guns continued to be legally used.It also banned the “transfer or possession” of large-capacity ammunition devices that carried more than 10 bullets, and noted that while there were exceptions, those not excluded would be treated as firearms.The biggest of the various loopholes in the bill was that it only applied to the specified types of weapons and large-capacity magazines that were created after the bill became law, meaning that there was nothing illegal about owning or selling such a weapon or magazine that had been created before the law was signed.The bill that ultimately became law was passed in the Senate with a vote of 95-4 in November 1993.The effort to have the House of Representatives’ iteration pass was pushed along by a bipartisan group of former presidents — Gerald Ford, Jimmy Carter and Ronald Reagan — who wrote a letter in May 1994 to House members urging them to pass the bill, according to The Los Angeles Times. Former President George H.W. Bush did not sign the letter, the paper noted.It passed the House in August 1994, with a vote of 235-195, and the reconciled version passed the Senate four days later. It was signed into law by Clinton as part of a larger crime bill on Sept. 13, 1994.The bill passed with a sunset provision of a decade in place, meaning that when lawmakers agreed to it they knew that it would automatically expire in 2004 unless renewed through another vote.Congress did not reauthorize the ban at that time, meaning that the sale and manufacture of those previously banned weapons was legal once again on Sept. 13, 2004.How effective was the banFindings and opinions on the ban, unsurprisingly, have differed.On Aug. 5, after the mass deadly shootings in El Paso, Texas, and Dayton, Ohio, Clinton tweeted a call for a new iteration of the ban.”How many more people have to die before we reinstate the assault weapons ban & the limit on high-capacity magazines & pass universal background checks? After they passed in 1994, there was a big drop in mass shooting deaths. When the ban expired, they rose again. We must act now,” Clinton wrote in the tweet.One of the most-cited studies on the effectiveness of the ban was done in 2004. That federally funded report by the National Institute of Justice at the Department of Justice found that the number of gun crimes involving automatic weapons dropped by 17 percent in the six cities involved in the study during the ban.The report pointed to a reduction in the use of assault pistols, but noted that there had not been a clear decline in the use of assault rifles.Ultimately, the report claimed that it was “premature” to make any decisive conclusions.”Because the ban has not yet reduced the use of LCMs [large capacity magazines] in crime, we cannot clearly credit the ban with any of the nation’s recent drop in gun violence. However, the ban’s exemption of millions of pre-ban AWs [assault weapons] and LCMs ensured that the effects of the law would occur only gradually. Those effects are still unfolding and may not be fully felt for several years into the future, particularly if foreign, pre-ban LCMs continue to be imported into the U.S. in large numbers,” the report stated.”Although the ban has been successful in reducing crimes with AWs, any benefits from this reduction are likely to have been outweighed by steady or rising use of non-banned semiautomatics with LCMs, which are used in crime much more frequently than AWs. Therefore, we cannot clearly credit the ban with any of the nation’s recent drop in gun violence,” the study’s summary said.

The prospects of another banCalls for a new assault weapons ban often crop up after mass shootings, and some lawmakers — mostly Democrats — hope to act upon those requests.Sen. Dianne Feinstein, D-Calif., introduced the Assault Weapons Ban of 2019 in January, though there has been little movement on the bill since.Some individual states have adopted their own iterations of the law, banning some semiautomatic weapons, but no such federal law has been in place since.According to the Giffords Law Center, which is associated with a nonprofit gun violence prevention group, seven states — California, Connecticut, Hawaii, Maryland, Massachusetts, New Jersey and New York — as well as Washington, D.C., have laws banning assault weapons.An amendment banning the future sale of assault rifles in Florida has prompted recent debate.A Florida National Rifle Association lobbyist spoke out against the proposal at a hearing in August, pointing to the impact it would have on gun manufacturers in the state, the Tampa Bay Times reported.”If I were the owner of one of these firearm manufacturing companies, I wouldn’t wait to see what voters do,” lobbyist Marion Hammer said, according to the newspaper. “If this were allowed to go on the ballot, I’d say, ‘I’m outta here."”Assault weapons and a possible federal ban or buyback program have been a popular topic among the 2020 Democratic candidates as well, ensuring that there will be continued debate on the issue for the months, and possibly years, to come.Copyright © 2019, ABC Radio. All rights reserved.

Mila Kunis shares the “parenting fail” her husband Ashton Kutcher called her out over
Why is Puerto Rico’s electric grid unstable?
Gwyneth Paltrow reveals how she talks safe sex and healthy relationships with her teenagers
‘The ﻿Wendy Williams Show’ ﻿to continue with guest hosts into November
‘The Bachelorette’ recap: Michelle meets the men, and finds a cheat among them
Why breakthrough COVID deaths can be misunderstood