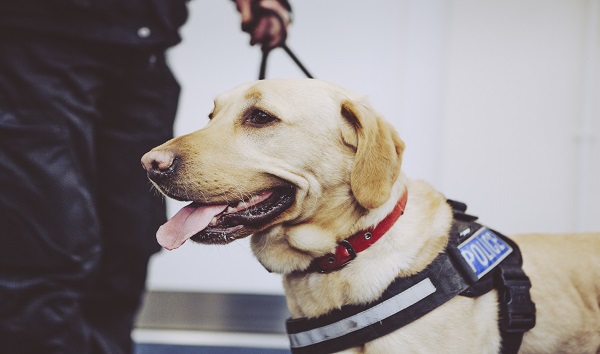 (NEW YORK) — Despite previous warnings, the State Department is still not doing enough to ensure the safety of bomb-sniffing dogs that it provides to partner countries for counter-terrorism, resulting in poor conditions, mistreatment, and sometimes death, according to a watchdog report.”While dogs in the [Explosive Detection Canines Program] are tools used to combat terrorism, they are also living creatures that deserve appropriate attention to their safety and well-being,” the department’s inspector general said in a new report. But some countries, in particular Jordan, have not been providing proper care.What’s worse, according to the inspector general, is that the State Department failed to provide enough oversight despite previous issues. At least 10 dogs died while others lived in “unhealthy conditions” in Jordan’s care from 2008 to 2016, for example, but the department continued to provide dozens of dogs to the critical counter terror ally.According to the new report, one veterinarian working with the department recommended the program be shut down because of how poorly the dogs were handled. The inspector general called for the department to halt providing dogs “until there is a sufficient sustainability plan in place to ensure their health and welfare” — a recommendation the department has rejected, citing national security.Dogs remain one of the most effective means of detecting explosives and therefore deterring terrorism, according to the department. But the report argues that this is only the case when they are being properly care for and are healthy.The Bureau of Alcohol, Tobacco, Firearms, and Explosives, or ATF, was initially in charge of providing canines to countries — 10 in total: Bahrain, Egypt, Indonesia, Jordan, Lebanon, Mexico, Morocco, Nepal, Oman, and Thailand. But the State Department developed its own program in 2016 where dogs and their new foreign trainers are given training in the U.S. and then sent back home.The program, however, did not have “any written policies, procedures, or written standards of care until after a draft” when the inspector general report was first provided in June, the report said. That meant there were no defined follow-up periods to check on canines’ health, and while the State Department team followed U.S. Army standards, they had no standard of care that they required of foreign partners. Letters of agreement about the canines with Egypt, Jordan and Morocco, for example, made no mention of standards of care, beyond that it is the country’s responsibility and not America’s, per the report.There have been problems with dogs in several countries. In Indonesia, all the dogs were overweight and had skin issues, the report said, while in Mexico, there was no record of health and welfare checks by the ATF.But Jordan has had the most persistent problems. The department told the inspector general that it had put in place guarantees to ensure better care, including sending “mentors” to live in country full-time and oversee the program.The report found, however, “Concerns persisted even with [mentors’] presence in Jordan… Since 2016, little progress has been made regarding the ability of Jordan to care for the [dogs]; in that time, however, [the State Department] has provided 66 dogs to Jordan.””Multiple dogs” appeared emaciated months after “supposed improvements” were reported, per the report, while many suffered from engorged ticks. Five veterinarians working with the program “expressed concern with the health and welfare of the canines in Jordan,” with two recommending on-the-ground oversight.In particular, the report told the story of three dogs — all of which happened after improvements were supposed to have been made.Zoe, a two-year old Belgian Malinois, died of heat stroke near the Syrian border in July 2017, which was attributed to “negligence and improper care” by her trainers.Mencey, a three-year old Belgian Malinois, became so sick with infections from fleas that even after the U.S. took him back for emergency medical care, veterinarians were unable to treat him and had to euthanize him in March 2018.Athena, another two-year old Belgian Malinois, was found in a kennel covered in dirt and feces, emaciated and unhealthy — but her poor condition wasn’t noticed by the two full-time mentors on the ground until the veterinarian team raised concerns. She was returned to the U.S. in April 2018 and successfully nursed back to health, and after her incident, the department sent a veterinarian team that arrived last November to live in country full-time for two years.Still, despite steps like that, the inspector general says it “remains concerned that Jordan is not able or willing to provide adequate care for working dogs without the Department’s intervention and that any improvements that have been made were simply a reaction to pressure.”They recommend Jordan not receive any new canines until there is a sufficient plan in place, but the department rejected that, saying it would harm U.S. national security interests to counter terrorism and prevent “explosives from reaching the United States.” Instead, the department’s counter terrorism bureau says it has a sufficient plan in place.No plan was ever provided to the inspector general, which says it therefore “cannot confirm whether this plan addresses canine health and welfare.”Copyright © 2019, ABC Radio. All rights reserved.