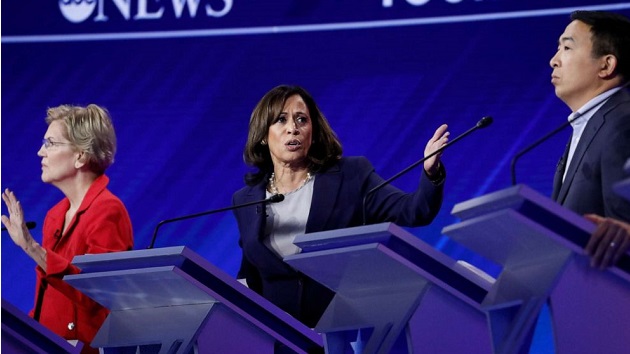 (HOUSTON) — The Democrats wrapped up their third presidential primary debate of the 2020 cycle, and although they repeatedly touted their own similarities, as well as their contrasts to President Donald Trump, that didn’t stop them from trading barbs. Some of the biggest zingers came as early as the opening statements, but those carried on throughout the three-hour debate Thursday night in Houston. While the winners and losers of the night will be debated in the days to come, here’s a selection of some of the night’s best one-liners:1. “It’s original, I’ll give you that,” Mayor Pete Buttigieg said, reacting to entrepreneur Andrew Yang’s announcement that his campaign will be giving $1,000 a month for a year to 10 families, a potential test run for his promise to support a universal basic income.2. “While Bernie [Sanders] wrote the bill, I read the bill,” Sen. Amy Klobuchar said during an early exchange over health care.The debate over Medicare for All was an early discussion where the candidates tried to distinguish themselves from one another.3. “They said, ‘Do you think Trump is responsible for what happened?’ And I said, ‘Well, look. Obviously he didn’t pull the trigger, but he’s certainly been tweeting out the ammunition,'” Sen. Kamala Harris said during a conversation about the mass shooting in El Paso, Texas.4. When asked if he was proposing taking away guns, former Rep. Beto O’Rourke said, “I am, if it’s a weapon that was designed to kill people on the battlefield.”He returned to the vow after talking about the shooting in Odessa, Texas.“Hell yes, we’re going to take your AR-15, your AK-47. We’re not going to allow it to be used against a fellow American anymore,” O’Rourke said.5. “He wants to take credit for Obama’s work but not answer any questions,” former Secretary Julian Castro talking about Vice President Joe Biden.That wasn’t the first time Castro directly took on Biden. During the earlier debate over health care, Castro accused Biden of getting tripped up, asking him, “Are you forgetting what you said two minutes ago?”6. “Step one is, appoint a secretary of education who actually believes in public education,” said Buttegieg.The South Bend mayor went on to say that teachers should be paid more and public education should “teach more to do with critical thinking and social and emotional learning.” The push to pay teachers more was echoed by other candidates on the stage, including Yang and Sen. Elizabeth Warren, who noted that she was the sole former public school teacher on the stage.7. “No, I’m going to go like the rest of them do — twice over,” Biden said, fighting back after a moderator tried to cut his speaking time.