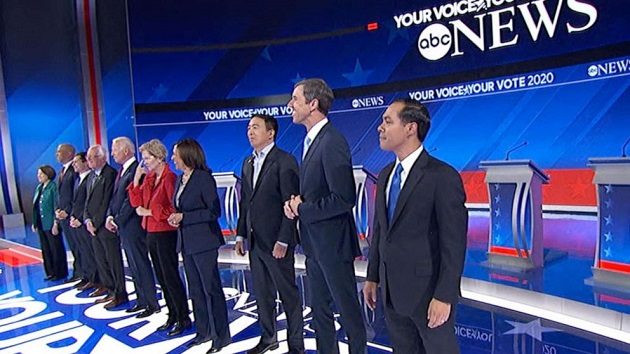 (HOUSTON) — Sparks flew Thursday night in Houston as the 10 highest-polling Democratic presidential candidates clashed on issues like health care and criminal justice, and fought to prove they were best-suited to beat President Donald Trump in 2020. Sen. Amy Klobuchar, Sen. Cory Booker, Mayor Pete Buttigieg, Sen. Bernie Sanders, former Vice President Joe Biden, Sen. Elizabeth Warren, Sen. Kamala Harris, entrepreneur Andrew Yang, former Rep. Beto O’Rourke and former Housing and Urban Development Secretary Julian Castro appeared Thursday at Texas Southern University in a debate hosted by ABC News.Here are the seven biggest moments of the night:1. Yang: 10 families to receive $12,000 from campaignYang kicked off the third debate by asking viewers to volunteer to accept his money.During his opening remarks, the candidate said his campaign would give 10 families $1,000 per month for a year to demonstrate the value of his signature policy, a universal basic income.”It’s time to trust ourselves more than our politicians,” Yang said, urging viewers to nominate themselves to participate “if you believe that you can solve your own problems better than any politician.”Some campaign finance experts have said the monthly gifts, dubbed “Freedom Dividends,” walk a very fine line in terms of campaign finance laws that prohibit the personal use of campaign funds.2. Biden fends off attacks on health careBiden staunchly defended the Affordable Care Act enacted under President Barack Obama and fended off attacks from Sanders, who introduced a Medicare For All bill, and from Warren and Castro.Biden questioned Sanders’ suggestion that under Medicare for All employers would return savings to employees.“Well let me tell you something. For a socialist, you got a lot more confidence in corporate America than I do,” Biden quipped.While Sanders said that his plan was better for Americans who fall ill with cancer or heart disease, Biden — whose son, Beau Biden, died from cancer in 2015 — shot back by saying he knows “a lot about cancer.”Castro, who also worked in the Obama administration, took aim at Biden’s health plan, saying that it would leave 10 million people without coverage, whereas Castro’s plan would offer universal coverage.”I’m fulfilling the legacy of Barack Obama, and you’re not,” Castro said.“That will be a surprise to him,” Biden replied.3. Harris confronted about record on criminal justice reformCriminal justice reform has been one of the most hot-button topics during the campaign, and Sen. Kamala Harris’ record as a prosecutor, as a San Francisco district attorney and then as the attorney general in California, has come under scrutiny.ABC moderator Linsey Davis noted that Harris’ recently-released plan reversed several of her previous positions: “You’ve said you changed on these and other things because you were, quote, swimming against the current and thankfully, the currents have changed. But when you had the power, why didn’t you try to affect change then?”Harris defended her prosecutorial history against what she called “distortions,” and pointed to her efforts to help those with criminal histories tied to drugs find employment, requiring law enforcement officers to wear cameras full-time and creating racial bias trainings for police officers.”Was I able to get enough done? Absolutely not,” she said. “But my plan has been described by activists as being a bold and comprehensive plan that is about ending mass incarceration, about taking the profit out of the criminal justice system.”4. Rivals offer kind words to O’Rourke on El Paso shootingDuring a night of tense exchanges, Biden, Harris, Klobuchar and Booker each made a point of offering kind words to rival O’Rourke for his handling of the mass shooting last month at a Walmart in his home town of El Paso, Texas.“I’m happy that people like Beto O’Rourke are showing such courage now and coming forward and also now supporting licensing,” Booker said. “But this is… what I’m sorry about — I’m sorry that it had to take issues coming to my neighborhood or personally affecting Beto to suddenly make us demand change.”O’Rourke spoke about El Paso and another, more recent deadly shooting in Odessa, Texas.“Hell yes, we’re going to take your AR-15, your AK-47,” he said. “We’re not going to allow it to be used against fellow Americans anymore.”5. Castro takes on Biden on immigrationCastro made a couple of pointed attacks against Biden, including for refusing to directly address criticism of the Obama administration’s policies on deportations while touting his time in the Obama administration only when it suits him.”He wants to take credit for Obama’s work but not answer any questions,” Castro said of Biden.6. Harris compares Trump to small man in Wizard of OzSpeaking about Trump’s trade policy, Harris compared the president to a character in the 1939 classic film The Wizard of Oz — and it wasn’t Dorothy.“He reminds me of that guy in The Wizard of Oz, you know, when you pull back the curtain, it’s a really small dude?” Harris said.7. Biden interrupted by protestersLate in the debate, just as Biden was beginning to talk about how he had dealt with a setback, he was interrupted by a group of protesters chanting from the audience.It was not immediately clear what the protesters were chanting, though photos taken as they were led out of the debate hall showed them wearing t-shirts that read: “DEFEND DACA, ABOLISH ICE, CITIZENSHIP FOR ALL.”When Biden began again, he offered an emotional account of losing his first wife and daughter in a car crash early in his career.